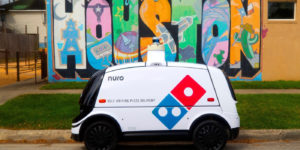 US startup Nuro, which specialises in autonomous electric vehicles, announces a production facility in southern Nevada. Nuro states the capacity of the future plant as “tens of thousands of delivery vehicles”. For production, Nuro is enlisting support from BYD North America.

Construction on the manufacturing facility is scheduled to begin in autumn 2021 and be completed in 2022. Nuro then plans to begin production of its third-generation autonomous electric vehicle on site. Also, in southern Nevada, a test track will be built to validate the vehicles. Nuro says it is investing $40 million, the equivalent of about €34 million, in both facilities.

In February 2020, Nuro unveiled the second generation of its self-driving electric vehicle called R2. At the time, the company reported it had received permits to begin testing the pod in Houston. At the time, the R2 was an evolution of the R1, unveiled in early 2018, designed for delivery services from restaurants, grocers and other businesses. What’s more, in 2019, the investment arm of Japan’s SoftBank Group made a nearly $1 billion investment in Nuro.

So now, the third generation of the vehicle is set to be commercialised. However, what the improvements over the R2 and R1 consist of, Nuro does not express in its announcement. Co-founder and CEO Jiajun Zhu is quoted as saying only that Nuro is “Building on our tremendous momentum—including strategic partnerships with industry leaders such as Domino’s, Kroger, and FedEx and operations in three states—we are now able to invest in the infrastructure to build tens of thousands of robots.”

The plant is expected to total more than 11,600 square meters and a land area of more than 32 acres, ensuring it can “meet the demand of current and future partners.” In addition, BYD North America is contributing an American-assembled electric vehicle platform that Nuro is developing into an autonomous vehicle, according to Nuro. All software and digital infrastructure will be designed, developed and operated from servers in the US to ensure security and privacy, the startup, founded in 2016, says.

For the testing facility, also planned, Nuro will take over 30 acres of the Las Vegas Motor Speedway and turn it into a closed test track. The goal there, it says, is the “sophisticated development and validation of autonomous road vehicles.” The test facility is also expected to be operational in 2022. Nuro’s total investment in southern Nevada is expected to create 250 jobs as a first step.

The US startup’s autonomous ‘e-pods’ are explicitly not intended for transporting people but only goods. Since no details are given on the new generation, here are some specifications on the predecessor R2: The vehicle must be about 1.50 meters high and not even one meter wide. Once the autonomous delivery robot has reached its destination (purely electrically with a maximum speed of 40 km/h), the recipients can remove their delivery via two large flaps. The battery onboard is so large that the delivery robot does not need to be charged during the day while in use.