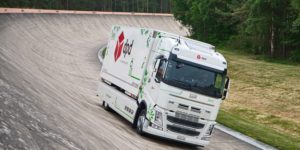 The record drive, which was recognised by Guinness World Records, took place on Continental’s test track ‘Contidrom’ near Hanover. The aim of the project was to prove “that sustainable, energy-efficient and cost-efficient electric mobility in the transportation industry is not a mobility concept of tomorrow, but is already a reality on European roads today”, says the truck brand Futuricum, which belongs to the Swiss company Designwerk.

On the high-speed oval of the Contidrom, two drivers with the Futuricum Logistics 18E completed 392 laps on the 2.8-kilometre track in shifts of 4.5 hours each – the steep bends were not extended, the drivers used one of the lower lanes. Lap 393 was not completed in full but was abandoned after about half. Nevertheless, with 1,099 kilometres in 22:56 hours, a new world record was set. By the way, the battery was not completely empty at the end of the record drive: to preserve the power storage, the drive was ended prematurely at a charge level of two per cent. All the data was recorded with an Avisaro Series 4.0 GPS device.

There is a simple reason why the battery was not taken all the way to the limit is that no specially prepared one-off was used for the record drive, but a vehicle that DPD has been using in everyday logistics in Switzerland since May. The 19-tonne truck is based on a Volvo FH and, after conversion by Futuricum, has an e-drive with 500 kW power and a 680 kWh battery. The latter value is the gross energy content, of which 578 kWh are usable. The batteries are purchased as modules from BMW.

“The Futuricum truck has been travelling between the depot in Möhlin near Basel to the distribution centre in Buchs/Zurich for about six months now,” says Marc Frank, Strategy & Innovation Director at DPD Switzerland. “The electric truck can master the roughly 300 kilometres every day without any problems. We are proud that we have now been able to officially document our performance level.”

The average speed in the Contidrom was 50 km/h, well below the usual motorway speed for long-distance traffic. According to Futuricum, this speed was deliberately chosen because it corresponds to a “realistic average value in everyday use”.

“Would like to offer a serious alternative for diesel vehicles”

For the record drive, the electric truck was on the road with the swap body but without a load. The unladen weight in this configuration is 15.5 tonnes, without the swap body it is 12.4 tonnes – and 6.6 tonnes payload. Designwerk justifies the “empty drive” with better comparability – payload and the energy requirements of ancillary consumers are different depending on the purpose and, in some cases, the drive.

“We want to offer the industry a serious alternative for diesel vehicles. That is why we have set ourselves a target with a signal effect: at least 1,000 kilometres range without intermediate charging,” says Adrian Melliger, CEO of the Designwerk Group. “The 50-km/h speed is a realistic figure in mixed urban/rural traffic: there are many other criteria, such as headwind, the condition of the road and ground temperature, that we cannot influence. We want to set an example for the performance of electric mobility with the record drive.”

If 98 per cent of the usable 578 kWh was used, the consumption for the record drive is around 52 kWh/100 kilometres. This consumption is of course due to the lack of payload and the ideal conditions with the steady driving. But how does the 680 kWh truck perform in practice?

Electrive.com has access to the data obtained by the truck of record in its everyday use from 1 May to 31 July: During this period, the 19-tonne truck covered 12,003 kilometres in Switzerland and consumed 12,820 kWh of energy. That makes 106.8 kWh/100km in practice. At times, the Futuricum also pulled a trailer through the Alps. Instead of the 1,099 kilometres in the flat Contidrom, this results in a practical range of 541 kilometres.

However, these values are only valid for use by DPD Switzerland. Futuricum points out that the different areas of application of commercial vehicles lead to very different consumption values. A four-axle concrete mixer in everyday use consumes 165 kWh or more. Even with logistics trucks, higher consumption by the customer is possible due to optional auxiliary consumers such as refrigeration units. On average, Futuricum therefore reckons with 160 kWh/100km – even though the vehicle has proven in practice that lower consumption and higher ranges are possible.

Record run not in ideal conditions

“The rise of electromobility has brought the importance of tyres more and more into focus,” says Hinnerk Kaiser con Continental. “We have already been working for some time on optimising our tyre portfolio for the demands of electromobility. The EfficientPro is a proven model developed especially for long-distance transport, with a focus on range and low rolling resistance.”

Even though it was not the focus of the world record, for the sake of completeness, the key data for charging the Logistics 18E: with alternating current, charging is possible with 22 or 44 kW, but here a charging process takes 29.2 or 14.6 hours. The Futuricum truck supports charging via CCS-Combo2 plug, which is faster with direct current. With 150 kW the battery is charged in 3.1 hours, with 350 kW it takes 1.3 hours.

To note, with 680 kWh, the record-breaking truck is not the model with the largest battery in the Futuricum range: Due to demand from some customers, the Swiss company also offers a semi-trailer truck with 900 kWh. If you subtract the usual buffers, around 765 kWh should be usable.