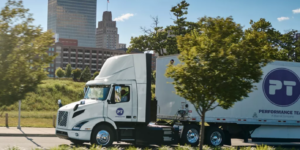 The 16 electric trucks will transport regional loads to Performance Team customers throughout Southern California on a daily basis starting later this year. Performance Team is a Maersk Company.

Volvo offers the VNR Electric truck, which was launched at the end of 2020, with a box body and in two versions as a tractor unit. The battery has a capacity of 264 kWh, which in the case of the “straight truck” with box body provides a range of up to 240 kilometres. Just a few weeks ago, Volvo delivered several VNR Electric trucks to New York City-based beer and beverage distributor Manhattan Beer Distributors.

Jason Walker, executive vice president of operations of Performance Team says “We’re seeing a 30% growth rate in our warehousing and distribution business. Customers are looking for more truck power to meet high volume delivery demands. This new order of Volvo VNR Electric trucks will give us firsthand experience on their performance carrying regional loads and environmental benefits. Our findings will help determine next steps in our fleet modernisation and the electric infrastructure necessary for future operations.”

Also today – and especially useful for both Volvo Trucks as well as Performance Team –  Volkswagen subsidiary Electrify America and NFI Industries announced they are planning the nation’s largest charging infrastructure project in the US to support heavy-duty electric trucks. By the end of 2023, 34 HPC chargers for electric trucks are to be built.