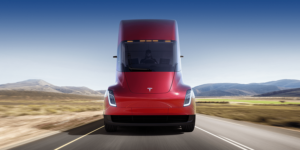 The latest round in testing and evaluation saw the partners try the compatibility of inlet and connectors for the new high-power charging standard for medium- and heavy-duty vehicles. According to NREL, MCS will facilitate charging capacity up to 3.75MW, seven times higher than the current light-duty fast charging technology, which peaks at 500 kilowatts. The NREL and CharIN estimate that truck charging stations of the future must provide fast charging at one megawatt or more.

The advance is not new, of course. While the government-funded lab suggests, CharIN was part of a “broader NREL effort” to enable high-power charging capacity, the association has been working to harmonise electric truck charging for over two years, primarily in the ‘High Power Commercial Vehicle Charging Task Force’ (HPCVC). Already in July 2019 the members’ organisation took proposals from Tesla, ABB, paXos, Stäubli, and the Volkswagen subsidiary Electrify America.

Tesla has since progressed on the Megacharger front, of course, and in March this year issued a one-megawatt charger in the US together with MHX using its work with CharIN. Furthermore, the Californian company joined the CCS initiative in 2016 and at the end of 2017, when presenting its electric truck, had also announced so-called Megachargers, which are to charge the battery of the Tesla Semi within 30 minutes to a range of 400 miles (640 kilometres).

Fast-forwarding to the NREL event this summer, the new MCS standard is now aiming for a peak charging power of 3.75 megawatts. The laboratory says this was to provide a single vehicle with the equivalent average power needed for 3,200 US homes or enough power to transfer the daily energy consumption of a typical home in about 28 seconds. The NREL adds that transferring this much energy over a short duration requires a unique design in the cabling, connector, and charging inlet. It also requires researchers to analyse how larger charging stations and electricity demand from trucks will affect the electric grid and how technologies such as smart charge management and behind-the-meter storage can mitigate any impacts.

The standard further specifies compatibility with up to 1,250 volts and 3,000 amps. NREL reports the participants used its Electric Vehicle Research Infrastructure (EVRI) evaluation platform within the Energy Systems Integration Facility (ESIF). It had tried to consider more real-world cases for safety and durability within the standard. According to the NREL, the testing events included representatives from leading vehicle manufacturers, charging equipment manufacturers, and component suppliers. These were, however, not named.

The latest development meeting at the NREL was co-hosted by the Charging Interface Initiative (CharIN) with support from the US Department of Energy and the California Energy Commission. The event looked specifically at the compatibility of inlet and connectors of megawatt charging stations. Such evaluations help ensure the new standard is interoperable, meaning multiple manufacturers will be able to design and build parts that work together, emphasises the NREL.

Accordingly, participants brought refined, moulded prototype connectors based on 3D-printed proofs of concept evaluated in the first round. By going through the process of developing moulded parts, the participants were able to put their designs to the test and ensure they could be manufactured at scale, the NREL reports.

“We’re providing the opportunity for the industry to come together, in a central location, so that even competitors can have detailed conversations on the technical merit of different equipment parameters and come to a consensus,” said Andrew Meintz, who manages NREL’s electric vehicle grid integration team.