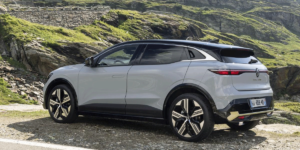 Renault has unveiled the all-electric Mégane at the IAA. The compact car with the full name Mégane E-TECH Electric will go on sale in two drive variants and with two battery options. As the first electric car on Renault’s CMF EV platform, it marks the start of a new generation of vehicles for the French company.

With the E-Mégane, Renault wants to assert itself as the top dog in the field of affordable electric mobility suitable for everyday use. At the IAA Mobility in Munich, the company is not stingy with superlatives: The electric Mégane has the slimmest battery on the market and the largest information display in the compact car class. The French also promise a range of 470 kilometres according to WLTP, the ability to charge bidirectionally and the embedding of the new model in a complete ecosystem. Renault has announced a sales launch in March 2022, with order books set to open in February. Announced are versions for both private and business customers.

Now let’s take it in turn: The Mégane E-TECH Electric will arrive in two drive variants with 96 or 160 kW and 205 or 300 Nm. Both three-phase synchronous motors are new developments from the Renault-Nissan-Mitsubishi alliance. According to Renault, the e-motors weigh only 145 kilograms including the gearbox (“10 per cent less than the current motor used in the Zoe”). The E-Mégane’s top engine is said to sprint from 0 to 100 km/h in 7.4 seconds. Renault gives the top speed as 160 km/h.

The battery installed in the underbody is from LG Energy Solution. It is based on NMC chemistry and has an energy content of either 40 kWh for a range of 300 kilometres or 60 kWh for up to 470 kilometres. The 40 kWh battery consists of eight modules with 24 cells each, which are distributed on a single layer. The 60 kWh battery comprises twelve modules with 24 cells each, distributed over two layers. In both cases, the dimensions of the battery remain unchanged: With a height of only eleven centimetres (at 1.96 metres long and 1.45 metres wide), it is said to be the “slimmest battery on the market”, as mentioned at the beginning. In addition, according to the manufacturer, it has an energy density of 600 Wh/l, 20 per cent higher than the Zoe.

The energy recovery system is based on two main components: Classic recuperation works via a four-stage system. In addition, Renault states that both the battery and the electric motor are liquid-cooled and a heat conduction system is built on top of this to use excess heat to heat the passenger compartment. And: the electric Mégane is to house an “even more efficient heat pump”.

Unlike when plans for the electric Mégane were unveiled in October 2020, there is now also full data on the model’s charging performance. The onboard charger installed in the car allows either 7.4 kW or optionally up to 22 kW AC charging, analogous to the Zoe – and thus more than most of the competition. Depending on the version, the vehicle is also fast-charging capable (130 kW DC charging power). With the latter value, the E-Mégane is said to be able to recharge energy for 300 kilometres according to WLTP in 30 minutes.

For the benefit of the charging curve, Renault says it has installed a “predictive charging management” system that brings the battery to the optimum temperature for fast or full charging. It uses information from the navigation system, according to the company’s headquarters. In addition, as reported at the beginning, the model has the technical prerequisite for bidirectional charging and can thus feed electricity back into the grid.

The dimensions of the new Mégane, made possible by the new platform of the Renault-Nissan-Mitsubishi alliance, are also interesting: it is supposed to offer the interior space of a conventional compact car, but be smaller on the outside than before. At 4.21 metres, the car is in fact around 15 centimetres shorter than the current combustion engine model. The wheelbase is nevertheless 2.70 metres. At 1.5 metres, the electric compact is only slightly higher than the current Mégane with a combustion engine, despite the battery in the vehicle floor.

The CMF EV architecture, which was specially designed for electric cars, is also expected to show its strengths in terms of handling. The platform is coupled with a new, direct power steering system. It also has a multi-link rear axle, which is being used for the first time and is intended to contribute to more precise wheel control. Incidentally, the wheels are explicitly positioned far to the outside to create space for the battery and interior.

Let’s move on to the design: the Mégane E-TECH Electric is the first model to bear the revised Renault logo. The dynamic architecture is reflected above all in the contoured bonnet and the rising window line, which rises again above the rear wheel arch, resulting in a massive rear end with a relatively low rear window. The radiator grille is largely closed. The door handles are integrated into the bodywork and open automatically when the driver approaches. The E-Mégane also features LED matrix headlights and an unorthodox daytime running light that winds up to the air intake openings in the front apron, significantly shaping the face of the vehicle. Depending on the equipment, 18- or 20-inch wheels are added.

Renault describes the highlight of the interior as the OpenR Display, the “largest information screen in a compact class model”, installed for the first time in one of its production vehicles. The screen in the form of a horizontal “L” is part of the higher equipment level and combines a landscape-format digital instrument cluster with driving-relevant data and a portrait-format multimedia monitor.

The seat covers are made of recycled materials, depending on the equipment. Basically, Renault states that a total of 27 kilograms of the visible and invisible parts in the vehicle are made from recycled plastics. 95 per cent of the vehicle can be recycled at the end of its life cycle, according to the manufacturer.

As further features of the interior, the French name trim strips that extend over the entire instrument panel and reach into the door panels. Depending on the version, ambient lighting as well as sound-absorbing materials and insulation for a high level of acoustic comfort. And: in the top trim, the E-Mégane is said to feature a sound system with 410 watts of power and, as the first series-production model, a wood finish (“Nuo”).

Apart from that, the model is said to score with numerous storage compartments. According to the manufacturer, the interior offers up to 30 litres of storage space. The boot volume is 440 litres, which “can be used without restriction thanks to the rectangular shape of the load compartment”, as Renault emphasises. The load capacity can be further increased by folding down the 1/3 to 2/3 split rear seat. The company does not give a concrete figure here. And while we’re on the subject of the vehicle’s transportability. Renault states that the electric Mégane is available with both a roof rack and a tow hitch and that the model can tow up to 900 kg (“braked trailer, depending on version”).

That leaves a look at the infotainment and safety qualities of the new electric car. A multimedia system developed with Google called OpenR Link (with the Android Automotive OS) provides smartphone integration with Android Auto and Apple CarPlay and allows the creation of personal user profiles. The system also includes the “Google Assistant” as a virtual assistant that responds to voice commands.

Furthermore, users have 26 assistance systems at their disposal, covering the topics of driving, parking and general safety. These include adaptive cruise control, stop & go and lane departure warning.

The Mégane E-TECH Electric will be manufactured at the Douai plant in northern France. According to Renault, the plant is to be developed into the largest and most competitive centre for the construction of electric vehicles in Europe with an annual production of 400,000 vehicles by 2025.

Six body colours will be available for the electric compact car when it launches in the spring: Rafale Grey, Schist Grey, Midnight Blue, Flame Red, Diamond Black and Glacier White. In the top trim, the roof, pillars and side mirror caps can also be painted in Slate Grey, Diamond Black or Glacier White on request.

Renault has not yet announced the price of the Mégane E-TECH Electric.

UK orders for the Renault Megane E-Tech Electric are now open. Specification and equipment details have been revealed, and customers are now able to place a reservation with a refundable £500 deposit. Pricing will be announced in the coming weeks.

The vehicle will be available in three tiers, all of which require the refundable £500 deposit. All Megane E-Tech Electrics will be powered by a 60kWh battery in the UK, although a cheaper 40kWh variant will later be offered in Europe. The 60kWh variant features a range of 280 miles. It will be the first of Renault’s ‘Generation 2.0’ electric vehicles and is based on the Renault-Nissan Alliance’s CMF-EV platform.

With the Megane E-Tech Electric, Renault is aiming to compete directly with Volkswagen’s ID.3. The pricing is reflective of that, as the ID.3 starts at £36,195 in the UK.