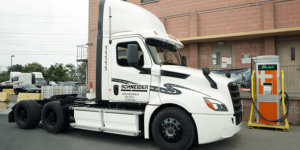 The company claims this would make the organisation one of the largest battery-electric truck fleets in North America. The buying decision followed a six-month pilot through Freightliner’s Customer Experience fleet as reported. It saw Daimler Trucks select 14 clients from a range of sectors to test the heavy-duty electric trucks over a period of 22 months in real-life applications.

“It’s the close collaboration and co-creation with our customers like Schneider that allows us to bring the best products to market,” said Daimler Trucks North America Vice President of On-Highway Market Development Steve Mignardi. He added the company was now at the point of offering state-of-the-art electric trucks together with smart infrastructure solutions. At least in Europe, Daimler Trucks in May this year reportedly agreed to work with Engie, EVBox and Siemens Smart Infrastructure on truck charging solutions.

Schneider, in today’s announcement, did not disclose technical details on the deal or charging infrastructure. The company has, however, had funding of an undisclosed amount for the 50 BEVs through the Joint Electric Truck Scaling Initiative (JETSI), which is sponsored by the South Coast Air Quality Management District (South Coast AQMD), California Air Resources Board (CARB) and the California Energy Commission (CEC).

Schneider President and CEO Mark Rourke said the money was a “big boost” and announced targets to reduce carbon emissions by 7.5% per mile by 2025 and 60% per mile by 2035, mostly at the fleet level. The company accordingly says it has plans for more BEVs and route options.

For Daimler Trucks, the division is starting series production of the Cascadia under the Freightliner banner as planned in Oregon this year. The fully electric eCascadia is based on the ICE model that Daimler says is the most successful long-distance truck on the North American market. The series eCascadia is specced to have up to 730 peak horsepower and batteries with 550 KWh usable capacity for a 250-mile range and the ability to charge up to 80 per cent in about 90 minutes.