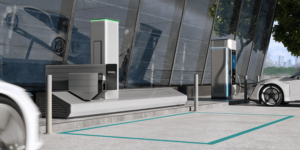 The ‘Siemens Autonomous Charging System’ is debuting in Munich today, and Siemens says the solution allows fully automated charging of electric vehicles from cars to trucks. The prototype now on display has a charging capacity of up to 300 kW, but the company is gearing for one megawatt in future.

This high capacity required to charge electric trucks will also lead to cables being too heavy for a driver to handle, i.e. during their mandatory break time. Here, Siemens wants to employ the Autonomous Charging System, which could plug in the charging cables.

Siemens has already developed a robot and is working with Einride AB, a developer of autonomous and electric transport systems, testing the solution in real life. As part of this test, Siemens says they managed to supply an autonomous truck, for the first time, with power by an autonomous fast-charging system.

Apart from heavy-duty scenarios, the company also notes other applications for the new solution, i.e. the Siemens Autonomous Charging System can also manage the charging process for people with physical limitations. What is more, who will plug in the charger when an autonomous car has found an available space on its own? A question that will grow in importance not only for the visually impaired.

“I dream of mobility that provides equal accessibility to people everywhere,” said Raul Krauthausen. The activist has worked for years with his Sozialhelden e.V., an association promoting barrier-free mobility that Siemens has teamed up with for guiding the new solution. “Smart cities, smart infrastructure, smart public transport for everybody, including those with disabilities, must become the norm,” added Krauthausen at the show in Munich.

The company states that Siemens’ work with the founder of Verein Sozialhelden e.V. is a core part of the #MoveToTransform campaign advocating a future-oriented transformation of mobility.

“The shift to e-mobility is already in full swing,” added Cedrik Neike, member of the Managing Board of Siemens AG and CEO of Digital Industries, before pointing to Siemens “cutting-edge automation and digitalization solutions”.

While working primarily in the B2B sector, the Versicharge line doubles as Siemens’ step into the home charging and, most recently, the US market. There, the company reportedly wants to manufacture over one million such chargers over the next four years.

At the IAA Mobility show, which for the first time takes place in Munich, Siemens’ home town, the German corporation also acts as charging partner for the ‘Blue Lane Road’ – a twelve-kilometre test route linking the fairgrounds with the open exhibition spaces in downtown Munich. Sixteen electric buses and around 250 electric cars from 20 different manufacturers will need to charge to run the route every day. Siemens says it has installed 68 charging stations with a total capacity of 3.6 MW at the starting point of the Blue Lane Road.

The company is also taking its new home show as an opportunity to launch Simulytic, a Siemens venture specialising in autonomous mobility. The so-called in-house startup, headed by Andrea Kollmorgen, aims to use simulation to measure the impact and safety of autonomous driving. Siemens states the specific goal is to ensure that transparency was a permanent part of the risk profiles of self-driving vehicles everywhere. Assessments will include incident probabilities, changing traffic flows and congestion patterns, the effects of weather and road conditions, among other localised factors, Siemens claims.