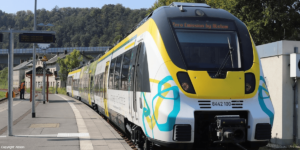 During the debut run in Saxony, the Alstom train changed its mode of propulsion from overhead line operation to battery-electric travel. This should enable these trains to serve routes that are not fully covered by overhead lines.

The current project has its origins in a research collaboration with the Technical University of Berlin that began at the end of 2016. In addition to the university and Alstom, partners include DB Regio, the regional transport network for Baden-Württemberg, and the German National Innovation Programme for Hydrogen and Fuel Cell Technology (NOW). The German Federal Ministry of Transport and Digital Infrastructure (BMVI) funds the project with nearly four million euros.

TU Berlin signed responsible for accompanying research. The studies have revealed, for example, that a large proportion of the lines currently operated with diesel vehicles include non-electrified sections of well under 60 miles (100 km) in Germany. Alstom, therefore, concludes, “The use of the existing catenary infrastructure allows battery-powered electric vehicles to be operated on these lines without major upgrades to the existing infrastructure.”

In its statement, the company also refers to an existing project in Saxony, where eleven Coradia Continental battery-electric trains for regional transport on the Leipzig-Chemnitz line were reportedly expected by 2023. The order was shared by the VMS (Verkehrsverbund Mittelsachsen) with the support of the ZVNL (Zweckverband für den Nahverkehrsraum Leipzig).

At the prototype run this week, Dr Harald Neuhaus, Managing Director of VMS, took the opportunity to express his confidence in the Alstom trains and also had an update on the above order. He said Alstom had already proved itself, so much so that  VMS topped up its initial order. It now includes a total of 29 Coradia Continental electric trains for Central Saxony, following the “successful delivery and maintenance of these trains” and resulting in the new order at the beginning of 2020, Neuhaus said.

However, it remains unclear whether Alstom’s latest partner, Nahverkehrsgesellschaft Baden-Württemberg, saw a differently specced prototype with the new train that took to the rails today. It is to enter service in Baden Württemberg and Bavaria in December 2021n and will be the first battery-powered train approved for regular passenger service in Germany since the 1960s. The public may also see the train for themselves on 9 September 2021 as part of the Digital Rail Convention in Annaberg-Buchholz, Germany. Guests on that occasion will include Federal Transport Minister Andreas Scheuer and Michael Kretschmer, Prime Minister of the Free State of Saxony.

In addition to the battery-electric Coradia Continental, Alstom also offers a fuel cell train with the Coradia iLint within the product family.

Not unlike the reasoning behind Alstom’s battery-electric train, the company notes that “Despite many electrification projects in several European countries, a significant proportion of the continent’s rail networks will remain non-electrified for the foreseeable future.” The Coradia iLint here uses the existing infrastructure without requiring electrification.

In terms of coverage, the hydrogen-powered iLint train is already in service in Lower Saxony, and Alstom holds orders over 41 units in Germany. Also, in the Netherlands, test runs have reportedly found the fuel cell train a viable alternative to any diesel model. The latest tests are taking place in Sweden, where an H2 train moves around Östersund. In addition, this week, a Coradia iLint went into service in Valenciennes in northern France to present the technology’s viability. Successful trials have also taken place in Austria and Italy, the operator FNM confirmed an order for 14 hydrogen-powered trains at the end of 2020.