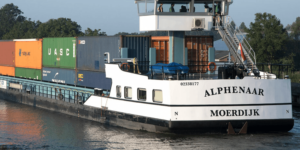 The Dutch company Zero Emission Services (ZES) has launched the first vessel bearing its exchangeable battery containers, so-called ZES packs, onboard, effectively turning the ship into an electric boat. The Alphenaar now operates between Alphen aan den Rijn and Moerdijk on behalf of the Heineken brewery.

Zero Emission Services is a joint venture set up by a Dutch consortium that has been committed to zero-emission inland shipping since last year. In concrete terms, the ZES business model is to rent out exchangeable battery containers, so-called ZES packs, to shipping companies. Around this core idea, the company is putting together a service package with charging stations, green electricity, technical support and a pay-per-use payment concept for ship owners.

To implement this approach, the Port of Rotterdam Authority, shipping company Wärtsilä, energy company Engie and bank ING have been working together since 2020. Support is also coming from the Dutch Ministry of Infrastructure and Water Management. The first customer is Heineken, as mentioned at the beginning. The beer company has committed to transporting beer from the brewery in Zoeterwoude to Moerdijk without emissions for ten years.

To this end, the battery-powered Alphenaar and a charging station at the CCT terminal in Alphen aan den Rijn are now going into operation. Since last year, the project participants have been working towards this moment. Wärtsilä – supplier of the first ZES packs – spent the past months tinkering with the assembly and testing of the energy containers, each equipped with safety and communication systems and 45 battery modules with a total capacity of 2 MWh. Engie developed the charging station at Alpherium, where the batteries are swapped and charged with certified green electricity. In July, the Alphenaar was also retrofitted and equipped with the standard plug connection for the ZES packs, among other things, says ZES. The first successful test operation took place at the end of August.

With the start of operations, ZES now wants to gather user experience to realise 30 emission-free shipping routes by 2030. In the short term, the fleet will be expanded to eight ships and the infrastructure to eight charging stations and 14 ZES packs and will be used primarily in the Rotterdam, Moerdijk and Alblasserdam area.

ZES is focusing on inland container shipping. When it was founded last year, the company predicted that by 2030 there could already be around 150 inland vessels using ZES-Packs. Meanwhile, the battery containers are designed so that they can also be used temporarily on land – for example, to stabilise the power grid or meet a temporary local demand for electricity.

“The energy concept that ZES is launching on the market contributes directly to reducing emissions by saving around 1,000 tonnes of CO2 and 7 tonnes of NOx per vessel per year. In addition, vessels sailing with ZES do not produce particulate matter and noise,” expresses Willem Dedden, CEO of ZES. The concept also includes a pay-per-use concept, which allows skippers to pay only for energy use. The investment in ZES packs will be covered by ZES, he said. “ZES actually offers authorities and companies a ready-made solution for increasing sustainability,” Dedden added. Shippers are offered a low-threshold, future-proof open-access innovation, he adds.

Dedden also emphasises that the ZES Pack system adapts to technical progress: “the ZESpacks currently in use work with lithium-ion batteries, but in the future, this could also be hydrogen, ammonia or something else. The ZESpack always fits on the connection, regardless of the type of energy in the container.” For this reason, he says, ZES is releasing the profiles for the connector free of charge so that the market can work with different suppliers of energy containers.