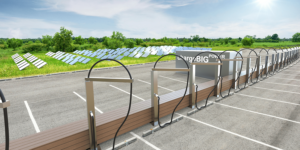 At the IAA Mobility, German supplier Mahle announced expanding its range of EV charging solutions. The chargeBIG system, optimized for AC charging, is to be supplemented by the chargeBIG Power charging management system, which can support fast charging with outputs of up to 750 kW.

Importantly, chargeBIG Power is not a 750 kW charging station but a charging management system that supports charge points with potentially up to 750 kW.

According to Mahle, chargeBIG Power relies on the principle of its well-known AC solution for long-term parkers, ChargeBIG. The charging system intelligently controls load distribution to simultaneously charge as many electric vehicles at the existing grid connection on site. What chargeBIG does for company parking lots or parking garages at airports in the AC area, chargeBIG Power will enable in the DC sector. This, according to Mahle, for example, will be important “particularly on long-distance routes.”

Instead of a parking garage, the DC solution could, for example, manage the charging points at a highway service area or a large DC charging park. However, the principle is the same: The charging points themselves are kept very simple, and their operation is supposed to be “very easy”. As Mahle goes on to state, “By selecting the tariff, the user can order the charging capacity that fits the electric vehicle and travel plan.”

The system also works with significantly lower charging powers than the maximum 750 kW specified and could therefore also charge a current EV with 400- or 800-volt technology. To ensure that electric cars could enter such ranges in terms of charging power, Mahle also presented a new battery cooling system at the IAA. This was also developed with chargeBIG Power in mind.

When chargeBIG Power is to be launched on the market and whether specific projects are already planned, Mahle does not state in the press release.