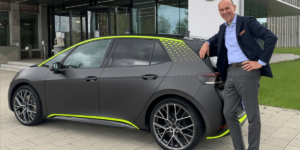 VW is also planning a performance variant for the ID.3. Brand manager Ralf Brandstätter confirmed this in an interview on the sidelines of the IAA. The basis for the model, presumably called ID.3 GTX, is already known.

In May, Volkswagen had shown a concept car under the project name ID.X, which was basically an ID.3 with the 77 kWh battery and drive components from the then recently presented ID.4 GTX. The power of the electric all-wheeler was stated to be 245 kW – slightly more than the ID.4 GTX.

As Brandstätter indicated to the British magazine Autocar at the IAA, the ID.X is to form the basis for the series version of an all-wheel-drive ID.3. However, the brand boss did not want to reveal any details about the vehicle’s performance – so it remains to be seen whether the 245 kW will remain in series production or whether the 220 kW version from the ID.4 GTX will be used. The latter is likely, as Brandstätter still stated that “more power means less range”.

However, there will probably be one change to the ID.4 GTX: In the electric SUV, the GTX drive is only available with the large 77-kWh battery. According to the report, Brandstätter had indicated that the “entire range of ID.3 batteries will be available”. However, only the official presentation of the GTX models will probably show whether an all-wheel-drive ID.3 GTX with the 45-kWh battery is actually coming.

As early as summer 2020, Autocar reported that the VW board was close to giving the go-ahead for an even sportier ID.3 under the R performance label. According to this report, this model is to be launched on the market in 2024. However, this has not been confirmed – especially the year. However, it is likely that an even more powerful version of the MEB compact model will be launched. Brandstätter hinted, according to Autocar, that “something will come from R”.

“Fun to drive is another part of mobility,” Brandstätter said. However, the VW brand CEO did not only refer this statement to performance and a sporty chassis: VW is currently building a concept car based on the ID.3 Cabriolet shown as a sketch in 2020.