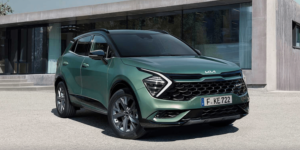 Kia has presented a version of its SUV model Sportage specially designed for Europe, which is also offered as a plug-in hybrid for the first time. The PHEV drive is known from other Kia models, but the design concept of the Sportage is new.

The PHEV drive is also used, for example, in the larger Kia Sorento. It combines a 1.6 litre turbo petrol engine with 132 kW with a 67 kW electric motor. Kia gives the system output as 195 kW.

The energy storage for the electric drive is a 13.8 kWh lithium-ion battery. Kia does not state the electric range; for the larger Sorento it is 68 kilometres – the more compact Sportage could therefore be slightly longer. Kia also does not give any information about the charging power, the Sorento only supports single-phase charging with up to 3.7 kW.

The rumour that there will also be a BEV version of the fifth generation of the Kia Sportage does not seem to be true. At least there is no mention of it in the current Kia press release.

Besides the PHEV, there are two other partially electrified petrol models. In the Sportage Hybrid, the same 1.6-litre petrol engine is combined with a 44 kW electric motor (system output: 169 kW) and a 1.5 kWh battery. In addition, the 1.6 T-GDI is also offered as a 48-volt hybrid in two power levels (110 or 132 kW). Among the two diesel variants (85 or 100 kW), only the more powerful one is available with a 48-volt system.

The new generation of the SUV model comes for the first time in a version adapted for Europe – it is slightly shorter than the one for the world market. Nevertheless, the European version of the Generation 5 is a few centimetres longer than its predecessor. The new model is 4.51 metres long (with a wheelbase of 2.68 metres), 1.87 metres wide and 1.65 metres high. Depending on the drive variant, the boot is said to hold up to 591 litres or 1,780 litres with the rear seat backs folded down – values for the PHEV version are not mentioned here.

Like its Hyundai sister model, the Tucson, the Sportage is strikingly styled. Like the EV6 electric model, the vehicle is said to be characterised by the new Kia design philosophy “Opposites United”.

“The all-new Sportage has been carefully designed, developed and honed specifically for Europe, in the process breaking boundaries and establishing new benchmarks in the SUV segment,” says Jason Jeong, President of Kia Europe. “With its forward-thinking exterior design and its pioneering interior, the new Sportage combines dynamic road presence on the outside with a class-leading, driver-focused premium cabin that benefits from the very latest breakthrough tech features.”

Kia is not yet naming prices for the fifth-generation Sportage. The market launch is scheduled for early 2022.

Ahead of its arrival in showrooms early in 2022, Kia UK has announced pricing and specifications for the all-new Sportage. UK order books for the new model open on 15 December. Plug-in hybrid variants will join the line-up towards the end of Q1 2022, priced from £38,395.

The lineup is also being extended with an HEV, with a 1.6-litre T-GDi engine, capable of 226bhp (168 kW). The hybrid version features two-wheel-drive, while PHEV models will offer all-wheel-drive.