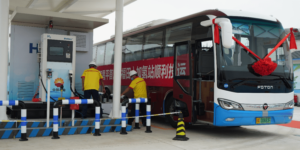 A Beijing-led city cluster has been appointed an FCEV demonstration cluster. Starting this year and running throughout 2025, at least 5,300 hydrogen fuel cell vehicles will be deployed in the Beijing-Tianjin-Hebei region to play out ten scenarios designed to exhibit global influence.

The most prominent use case will likely be the 2022 Beijing Winter Olympics, when fuel cell vehicles will take on passenger transport in a bid, not unlike the Tokyo 2020 plans. According to the Beijing Municipal Commission of Economic and Information Technology, further demonstrators of hydrogen mobility in the Beijing zone include port operations, transportation of commodities, logistics distribution, and buses.

The demonstrator projects are part of a scheme the Beijing Municipal Government formulated to boost its hydrogen industry between 2021 and 2015. The capital takes the lead in the Beijing-Tianjin-Hebei city cluster, aiming to demonstrate a hydrogen economy with global influence and an industrial chain value of over 10 billion yuan ($1.551 billion) per year.

Beijing was selected as one of the first batches of FCV demonstration cities in China. It comprises twelve cities and districts represented by Beijing’s Daxing district, Tianjin’s Binhai New Area, and Hebei’s Baoding city.

For today’s news on the Beijing-Tianjin-Hebei city cluster, no details have been made public, i.e. on manufacturers involved. There are, however, some pointers.

Private initiatives appear to follow, for example, Great Wall Motors, which, in April announced it would bring a fuel cell passenger car fleet to the Beijing Olympics. Updates, however, have since been scarce.

However, Great Wall’s subsidiary FTXT Energy Technology and their vehicle partners Dayun, Dongfeng and Foton, have supplied a fleet of 100 heavy-duty trucks with hydrogen fuel cells for a construction project in the province of Hebei this August as reported. The heavy-duty FCEV will help to build the retort city Xiong’an New Area”. Xiong’an will be in the east of Baoding, about 100 kilometres from Beijing and Tianjin.

Already in September 2020, SAIC had announced as well that it would bring at least ten fuel cell vehicles to market within the next five years. This came at a time when the Chinese government was expected to announce further support for fuel cell vehicles.

For its part, SAIC aims to achieve annual sales of more than 10,000 units by 2025, corresponding to a share of more than ten per cent of the Chinese FCEV market. As SAIC announced in its strategy presentation, by 2025, cumulative sales are expected to exceed the 30,000 vehicle mark.

US fuel cell truck maker Hyzon has also become active, latest since signing an MoU with logistics and leasing group Shanghai Hydrogen HongYun Automotive for the purchase of 500 fuel cell trucks. Hyzon Motors CEO Craig Knight said at the time, “Hydrogen fuel cell technology has been adopted more quickly in China than in the rest of the world.”