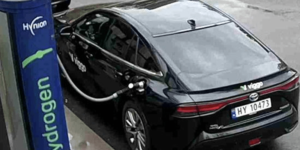 The first hydrogen fuel cell taxis from the Danish taxi company Viggo are in operation in the Norwegian capital Oslo. The three vehicles are Toyota Mirai.

By next summer, the company wants to put a total of 100 battery and hydrogen taxis into operation, without giving an exact breakdown. Viggo has an agreement with Hynion for the refuelling of the fuel cell vehicles.

The Toyota Mirai has a range of 650 kilometres and a tank that can be filled in 3-5 minutes.”Hydrogen is very suitable for taxis that want to drive long distances and be on the move as much as possible. With hydrogen you can fill the tank in a few minutes and drive many hundreds of kilometres before the next filling. This means that you drive climate-friendly and do not have to spend a lot of time charging,” says Joar Tennfjord, CEO of Viggo. By 2024, all taxis in Oslo are to be emission-free. To achieve this goal, fuel-cell cars will also play a role.

“Viggo is investing massively in climate-friendly taxis, and our cars rely exclusively on electricity or hydrogen. If the entire taxi industry is to become climate-neutral, we depend on there being enough charging stations as well as hydrogen filling stations,” Joar Tennfjord continues. Viggo has an agreement with Hynion for the refuelling of the fuel cell vehicles. In the Oslo area, there are currently only hydrogen filling stations at Lillestrøm and Høvik, the latter of which will be used by Viggo’s three new Toyota Mirai. The agreement also includes new refuelling stations that Hynion plans to build elsewhere in Norway, but has not given further details.

Viggo launched in Copenhagen in 2019 and has exclusively zero-emission cars in its fleet. In addition to the Danish capital, the taxi company has also stationed vehicles in Aarhus. Now it is entering the Norwegian market with Oslo. In October last year, we reported that the Danish startup had ordered 300 Fisker Ocean electric cars.

Addison Lee to electrify fleet with ID.4s by 2023