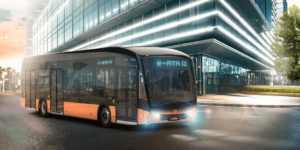 The Turkish bus builder Karsan has presented its new electric bus family e-ATA, which is offered in lengths of ten, twelve and 18 metres. Production has already started. The company has also taken its first order for a total of 66 units of the new buses from Romania.

The e-ATA models complement the company’s existing electric minibuses. In Bursa, Turkey, Karsan has already been building the six-metre Karsan Jest Electric and the eight-metre Karsan Atak Electric for several years. In the course of introducing the larger bus family, the two existing minibuses will now be renamed e-Jest and e-Atak. Karsan does not provide details on the prices of the new e-ATA models.

The following information has been revealed about the technical design: The low-floor e-ATA models have inherited the exterior design from the Turkish partner Bozankaya Sileo. The news website Omnibus News writes that Karsan acquired all rights to the Bozankaya Group’s electric buses, including technology transfer, in May 2020. Apart from the exterior, however, all components of the e-ATA family are said to be in-house developments, such as the electric motors integrated into the wheel hubs, which produce up to 250 kW and 22,000 Nm in the 10- and 12-metre-long variants and up to 500 kW in the 18-metre-long articulated bus. The maximum speed of all three models is 80 km/h.

Up to 300 kWh of energy storage can be installed in the 10-metre model, up to 450 kWh in the 12-metre solo bus and up to 600 kWh in the articulated bus. Karsan gives a range of up to 450 kilometres for the version with the longest range. While the Turkish manufacturer uses i3 batteries from BMW in the e-Jest and e-Atak, the energy storage units for the e-ATA models are LFP batteries.

Karsan has not yet revealed futher information on the vehicles’ batteries. The manufacturer also remains vague about the charging power when presenting the new models. Depending on the size of the battery, the models can be charged via DC in one to four hours, they say. On its website, however, Karsan specifies that cable-based charging with up to 150 kW power is possible ex-works. Optionally, the buses can also be charged via a pantograph.

The manufacturer says that the buses can carry 90, 100 or more than 150 passengers, depending on the length of the vehicle and the number of batteries installed. Cameras instead of rear-view mirrors are optional. In addition, the e-ATA range is equipped with a number of modern assistance systems, including a collision warning system and a lane departure warning system. Karsan CEO Okan Baş said at the presentation that the company’s entire electric bus range will also be equipped with autonomous driving technologies in the next few years.

The first ten units of the ten-metre e-ATA are to be delivered to Romania before the end of 2021, as well as 56 examples of the 18-metre variant from next year. According to Baş, this is “the largest export of electric buses from Turkey to date”. While the first ten units are to go to Slatina in December, the articulated buses are expected to be handed over to two unnamed cities in Romania in 2022.