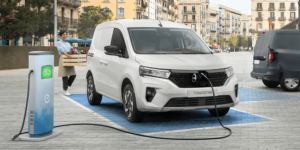 Nissan has presented the first details on the successor of its small van NV200 and its electric variant e-NV200. The new model is called Nissan Townstar and has a purely electric offshoot. The electric version is based on the CMF-C platform developed together with alliance partner Renault.

The Townstar will go on sale as a commercial vehicle and passenger car variant, as a panel van and a high-roof station wagon, and will be offered in two length versions and with five to seven seats. The vehicle shares the platform with the new Renault Kangoo and Mercedes Citan.

With this in mind, the new Nissan van gets the same 44 kWh battery as the aforementioned duo. By comparison, the e-NV200 has a maximum of 40 kWh on board to date. The electric Townstar is expected to be produced in Maubeuge, France, one of the commercial vehicle competence centres of the manufacturer alliance. Nissan has yet to provide details on market launch and prices. It is known that the new Kangoo and Citan will be available as electric transporters in 2022.

In terms of technical specifications, the following values have been published for the Townstar: the Japanese company combined a 44 kWh battery with an electric motor that produces 90 kW and 245 Nm. This is more power than the Kangoo and Citan, which both have 75 kW. Nissan gives a range of up to 285 kilometres but points out that homologation is still pending. The manufacturer also speaks quite generally about having equipped the model with intelligent energy management and effective battery cooling.

The fact that the CCS fast-charging standard is being introduced at Nissan with the electric Townstar is worth noting. With the e-NV200, DC charging is still carried out with a maximum of 50 kW via CHAdeMO. In future, the successor will be able to be charged to 80 per cent of the battery capacity with up to 75 kW in 42 minutes via CCS. For AC charging, the Townstar also gets an on-board charger with 11 or 22 kW. This is also a significant increase: the e-NV200 has a 6.6 kW on-board charger fitted ex-works.

Basically, the Townstar will no longer have too much in common with the NV200. This is because, according to the manufacturer, the model has been “developed from scratch in terms of quality and functionality” on the CMF-C platform. In the commercial vehicle version, the electric Townstar offers 3.9 cubic metres of load volume and a payload of 800 kilograms. In addition, according to Nissan, up to 1,500 kilograms of towing capacity can be attached to the hook. This value applies to the Townstar in general. It remains to be seen how this value will turn out explicitly for the purely electric version. Access to the cargo is via large sliding side doors and at the rear, depending on the model variant, via a tailgate that opens upwards or asymmetrically divided wing doors that can be opened by 180 degrees. The storage space is supplemented by several compartments in the interior, including a special compartment for office utensils.

The passenger car version has five to seven seats, up to 775 litres of storage space and a low loading sill. Nissan estimates that more than every second customer in Germany will opt for the estate version instead of the van.

Nissan says it addresses the issues of connectivity and safety with “more than 20 technologies, some of them new”, which are used in the Townstar. The features include a crosswind assistant, trailer stabilisation, an intelligent emergency braking system with pedestrian and cyclist detection as well as intersection assist, lane departure warning and blind-spot assist, traffic sign recognition, intelligent cruise control and parking assist. Cameras distributed around the vehicle also provide 360-degree all-round vision, which should make parking and manoeuvring in tight spaces easier.

Also onboard is the electric Townstar is the ProPilot driver assistance system, which enables semi-automated driving on motorways: according to Nissan, this means that the van follows vehicles ahead, accelerates and brakes independently to a standstill and is kept in the centre of the lane – even in slight curves.

In addition, the model is supposed to score with its level of connectivity. In addition to the E-Call emergency call system, the Townstar has smartphone integration via Apple CarPlay and Android Auto, according to the manufacturer. Also included is a facility for wireless charging of the mobile phone while driving as well as improved connected services. The connectivity and infotainment functions are controlled via an eight-inch touchscreen, which is placed behind the steering wheel with a ten-inch digital instrument display.

Gaussin to expand to Australia with Nexport