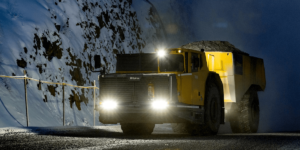 ABB has entered into a collaboration with Epiroc and Boliden, a mining equipment manufacturer and mining company from Sweden. The trio is working to develop and demonstrate a trolley truck system on a test track at the Kristineberg mine in northern Sweden.

The system will be based on Epiroc’s zero-emission mine transport vehicle Minetruck MT42 Battery and installed at Boliden’s Kristineberg mine. The vehicle will be equipped with a current collector and connected to an overhead line system. ABB says it will be primarily responsible for the design of the overall system, the definition of standards and the vehicle interfaces, as well as the rectifier plant for the test track.

The Swedish-Swiss technology group says that the electrical infrastructure is part of electrification and digital systems from ABB’s Abilit-eMine portfolio, which aims to accelerate the decarbonisation of the mining sector. For this purpose, ABB is partnering with mining customers and OEMs to play a “fundamental role in the transition to zero-emission mining operations”.

The partnership with Epiroc and Boliden is one example. ABB has been working with the latter mining company for some time. Some time ago, for example, the two companies installed and commissioned an infrastructure to supply power to several mining vehicles at Boliden’s Aitik mine. In the future, more electric vehicles will be used at the Rävliden mine (an expansion area of the Kristineberg mine). Boliden is considered the largest player in Sweden’s open-pit copper mining sector.

ABB and Epiroc also already know each other well. The Swedish mining equipment company has been active in the business of battery-powered machines for underground mining for years. Epiroc cooperates with ABB and Northvolt, among others, in their development.

“ABB is supporting mining companies’ electrification strategies by working together with OEMs, such as Epiroc, and many other technology innovators to build an interoperable system and help fast-track the development of emissions-reducing systems,” said Max Luedtke, Global Head of Mining, ABB. “No company can do this alone and through our recently-launched ABB Ability™ eMine portfolio we can ensure electrification and automation of the whole mining operation.”