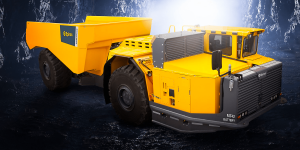 Northvolt has delivered its most significant order of battery systems to Epiroc. The mining company will integrate the Li-ion cells into its mid-sized drilling family. The order represents the first commercial roll-out of Northvolt’s latest generation of the battery system, the Swedes said.

Northvolt has been working with Epiroc for over two years reportedly and during this time has developed a platform for battery systems tailored to Epiroc machines. The new solution is a modular heavy-duty sub pack which may be connected in varying configurations within a battery system to scale to meet the requirements of various vehicle platforms, Northvolt describes.

The new systems now supplied will be used in Epiroc’s Scooptram ST14, a 14-tin underground loader and the MT42 minetruck with a payload of 42 tonnes. Anders Lindkvist of Epiroc’s division Underground considers the solution the result of “a true collaboration between Epiroc and Northvolt,” both in terms of hardware and software. He continued that the new design shows “a lot of improvements in terms of reliability and serviceability,” all sourced through an 18-month trial the companies have conducted over the last 18 months.

Testing started at Epiroc’s site in Örebro before moving on to the real-world of commercial operation at Agnico Eagle’s Kittilä gold mine in Finland in Spring 2019 as part of the EU funded Sustainable Intelligent Mining Systems (SIMS) program.

In terms of feasible improvements, Anders says operators “experience the machines to be more powerful”. “Other benefits are becoming clear too – such things as the quietness of operations, and the possibility to talk to bystanders next to machines, seem more important than we thought,” notes the executive.

Epiroc aims to offer battery-electric versions for its entire fleet of underground mining machines by 2025. This means the Northvolt powered equipment will be made available worldwide. The companies have also been working with ABB for the charging installations.

In terms of Northvolt’s on-going scale-up and preparation for battery cell production in Europe, Northvolt had recently upped their production targets, now aiming for capacities of around 150 GWh and a market share of 25% in Europe by 2030.

Besides, at the joint facility with Volkswagen in German Salzgitter, capacity is to be upped by 50 per cent. The joint venture is about to submit the building application for the already planned expansion this month as reported.