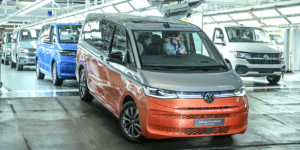 The first production vehicles of the new Multivan presented in June have rolled off the production line at Volkswagen Commercial Vehicles. This is the first time a Multivan with a plug-in hybrid has been produced at the Hanover plant.

The passenger car platform does not allow for such high payloads as required by a Transporter or the California camper conversion. Therefore, the T6.1 for these applications – without PHEV – will remain in the range. The T7, on the other hand, will be aimed at private customers. When the all-electric ID. Buzz is added, VW will thus offer three different vans in the five-metre class.

In addition to the commercial vehicles, VWN’s Hanover plant is also preparing for the production of other electric models from other Group brands. The production of fully electric premium models for other group brands is planned from 2025, as VW Commercial Vehicles confirms in the current announcement. However, no models are mentioned. According to various reports, the model in question is the electric sedan that Audi is developing under the project name ‘Landjet‘. Offshoots for Porsche or Bentley may also be built in Hanover.