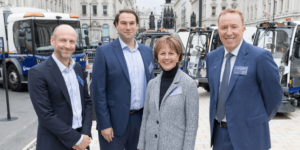 In the UK, Westminster City Council (central London) and its waste contractor Veolia have unveiled a 60 strong fleet of new and ‘upcycled’ electric vehicles. This means that street cleaning services in London’s famous West End are now completely fully electric.

The new electric fleet is made up of electric refuse collection vehicles  (e-RCVs) to e-trikes and e-sweepers. Westminster’s waste services manager told letsrecycle.com that what they are calling ‘upcycled’ means that one or more diesel garbage trucks have been retrofitted with an electric engine, which is indeed upcycling, i.e., reusing a product in a different form that is more valuable than the originally intended format – perhaps just not a term we are used to hearing in the transport industry.

Retrofitting fossil-fuelled vehicles with electric motors is indeed becoming increasingly common – most especially for speciality vehicles that are not yet being produced with electric drives. That being said, electric garbage trucks are indeed rolling out being newly manufactured by Renault and BYD, among others. In fact, in March this year, Renault joined a recycling cooperation with Veolia. However, Westminster’s new electric vehicles came from Dennis Eagle, which is a UK-based bin lorry manufacturer owned by Terberg RosRoca Group, Europe’s largest refuse collection vehicle manufacturer. The recycling magazine letsrecycle.com was told that the cost of the vehicles was dependent on type but ranged from around £10,000 for an e-trike to £450,000 for an e-RCV.

Veolia has installed smart charging infrastructure in depots across Westminster’s West End. The vehicles are charged once per shift. In a nice piece of circular economy, the city council will generate the electricity for the vehicles with the waste that the vehicles collect. This will be done at a depot in Deptford in a waste-to-energy procedure.

Councillor Rachael Robathan said: “This collection of state-of-the-art electric vehicles will transform the way we clean our streets and collect waste and recycling across Westminster. Cleaning in the West End is now fully electric, and the rest of the City soon will be as we roll out more electric vehicles over the next 12 months.”