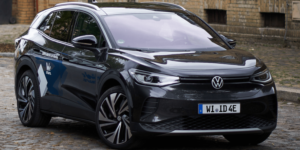 In Germany, WeShare, Volkswagen’s all-electric free-floating car-sharing service, has renewed its Berlin fleet and added the all-electric ID.4 to its range of vehicles. Initially, around 100 ID.4s will be successively added to the fleet.

The carmaker’s car-sharing service reports it is also moving forward with the replacement of the Berlin e-Golf fleet with the new models. By the end of October, WeShare aims to have exchanged all of the previous 1,500 e-Golf for new ID.3 and ID.4.

WeShare officially launched in Berlin in summer 2019 – initially with the aforementioned 1,500 e-Golf, later joined by 500 e-Up. In November 2020, the first ID.3s were flown in. Since February 2021, WeShare has also been offered in Hamburg.

“After two years, we are modernising our all-electric car-sharing fleet in Berlin,” says Philipp Reth, CEO of WeShare. “With the ID.3 and the ID.4, we are now offering two all-electric models that further expand the range of possible use cases from one minute to several days for our customers.”

Reth is keen to point to the ranges of up to 425 kilometres for the ID.3 and up to 520 kilometres for the ID.4 – in combination with the fast-charging capability, “the standing times of the vehicles at the public charging infrastructure can be reduced considerably”. According to WeShare, the ID.4 in particular “lends itself to daily rentals and long-distance journeys as well as larger transports”.

WeShare has also given a brief update on their activities in Hamburg: the fleet there recently reached the planned number of 800 ID.3s –  a number that WeShare actually wanted to reach in April. The deployment of the ID.4 in Hamburg is “not yet planned for the time being”. WeShare has not made any comments on their planned launch in Munich, which was postponed due to the Corona pandemic.

WeShare told elective some time ago, that the used e-Golf cars, which were enormously popular, will go “back to the owner Volkswagen and there into secondary recycling” i.e.: to the used car market.

Westminster streets to be cleaned with EVs