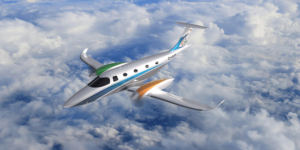 The German provider of business flights Air2E has ordered a fleet of the 8-seater electric aircraft eFlyer 800 from Bye Aerospace. However, a concrete number and schedule are not yet mentioned.

Air2E was founded in 2017 by businessman Norbert Werle and now operates 20 aircraft for business flights. The turboprop aircraft still run on paraffin, but the name Air2E suggests that CEO Werle has focused on the switch to electric flying from the very beginning.

With the purchase agreement now concluded – according to the announcement it is not a declaration of intent but a binding contract – Air2E wants to convert its fleet and, according to its own statements, “to be the first fully sustainable air taxi operator in Europe in a few years”. With Bye Aerospace’s e-aircraft, Werle aims to preempt air taxi services that rely on electric vertical take-off and landing (eVTOL) aircraft.

“Our AirTaxi service is already the most economical individual flight solution on the market,” says Werle. “Unlike large airliners, small 4- to 10-seat aircraft are the ideal size for a regional network of individual on-demand flights. This puts us on the fastest path to sustainable and cost-effective air travel with all-electric aircraft like the eFlyer 800 now.”

While it will still be a few years before the electric aerial taxi service begins – Bye Aerospace does not plan series production of the 8-seater aircraft until 2025 – the airfare is already set: Air2E has introduced a pricing model for “flexible, individual flights starting at €4 per kilometre” with immediate effect (i.e. also for the combustion aircraft).

As Werle stated to the Handelsblatt, the electric airplane with its technical data “ideally fits Air2E’s business model and is sufficient for about 90 per cent of the requirements for business trips within Europe”. With its two electric motors, the eFlyer 800 has a range of around 900 kilometres and reach a cruising speed of 600 kilometres per hour. The one catch is that for the batteries, Bye Aerospace previously relied on lithium-sulphur cells from Oxis Energy – but the British company has since gone bankrupt.

The fact that no concrete number of ordered aircraft has been mentioned yet – Werle apparently spoke to reporters of an “initial volume of several aircraft” – is apparently also due to the fact that there is no approval for the eFlyer 800 in Europe yet.

However, Bye Aerospace already has orders from Europe; as reported, five electric aircraft are to go to Rheinland Air Service GmbH (RAS). Bye Aerospace also recently announced that the KLM Flight Academy at Groningen Airport Eelde in the Netherlands has completed pre-orders for six eFlyer 2 and eight eFlyer 4. The Reykjavik flight academy has also placed an order for several of the electric aircraft.