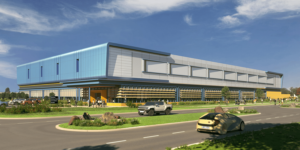 General Motors is building a new battery cell innovation centre on its Global Technical Center campus in Warren, Michigan. The facility will be dedicated to the development and production of GM’s next-generation Ultium cells and will be operational by mid-2022.

The centre, called the Wallace Battery Cell Innovation Center, will enable GM to, among other things, accelerate the development of new technologies such as lithium metal, silicon and solid-state batteries – as well as the associated production methods. In addition, GM wants to bundle the work with its battery cooperation partners at this location. In this respect, the facility plays a central role in realising GM’s vision of an all-electric future, according to an accompanying statement. And specifically also in the realisation of GM’s declared goal of achieving at least 60 percent lower costs for the next generation of the Ultium battery.

By way of background, it became public back in spring that GM was aiming to make the next generation Ultium a “lithium metal battery with a protected anode” that would offer “a combination of affordability, high performance and energy density”. Already at that time, that sentence of a 60 per cent cost reduction was dropped. The technology of solid-state battery specialist SolidEnergy Systems (SES) is supposed to be the key. Against this background, GM invested 139 million US dollars in the company in April. Ergo, GM is flirting with the same path as the Volkswagen Group, which, as is well known, has also brought a specialist for solid-state batteries on board with QuantumScape. The same pattern can be seen with Ford and the tech company SolidPower (together with Hyundai and BMW).

The Wallace Centre will nevertheless be more broadly based and, according to the US carmaker, will include different cell testing and formation chambers, a materials synthesis lab for developing cathode active materials, a slurry mixing and processing lab, a coating room, an electrolyte production lab and a forensics lab with materials analysis equipment and advanced software. The complete facility will be expandable to “at least three times its current footprint” and is expected to build its first prototype cells in the fourth quarter of 2022.

The focus will be on different battery types and cell formats. GM says the Wallace Centre will produce batteries with an energy density of 600 to 1200 Wh/l, as well as key battery cell components such as active materials. It also says the centre should be able to build “large-format, prototype lithium-metal battery cells for vehicle usage beyond the small-scale lithium-metal cells typically used in handheld devices or research applications. These cells could be as large as 1,000 mm, nearly twice the size of the initial Ultium pouch cells and will be based on GM’s proprietary formula,” according to the manufacturer.

The production methods also to be developed at the Wallace Center will be quickly deployed at GM’s battery cell factories, “including GM’s joint ventures with LG Energy Solution in Lordstown, Ohio, and Spring Hill, Tennessee, as well as other as yet undisclosed locations in the US,” the company said. The work will be supported by the development of a “data farm” to make use of artificial intelligence in battery development. With this in mind, GM wants to “bring together all battery-related processes inside and outside the lab in a single, giant cloud”.

“The Wallace Center will significantly ramp up development and production of our next-generation Ultium batteries and our ability to bring next-generation EV batteries to market,” sums up Doug Parks, GM executive vice president responsible for global product development, procurement and supply chain. “The addition of the Wallace Center is a massive expansion of our battery development operations and will be a key part of our plan to build cells that will be the basis of more affordable EVs with longer range in the future.”

‘Ultium’ is GM’s term for both a new, flexible 400-volt or 800-volt EV-platform, as well as its new motor and battery families. Specifically, there are five drive units and three motors to choose from for the platform, which can be used to flexibly design future electric models. The battery cells, which are important for electric cars, will not be purchased from a cell supplier for the Ultium models, but will be manufactured in the joint venture with LG Energy Solution in two of its own battery factories in the USA.

In the current Ultium battery system, the large-format pouch cells with NMCA chemistry can be arranged vertically or horizontally in the battery pack. The capacities of the battery packs range from 50 to 200 kWh, which should enable ranges of 400 miles (644 km) and more.