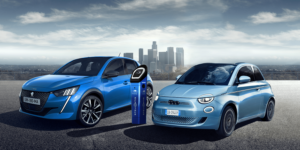 Stellantis and the F-Charging estimate to begin building the network this year, starting in Italy. Then the network will expand to “the whole of Europe,” the partners announced without going into detail.

However, while the cooperation was announced just today, preparations behind the scenes were already underway. F Charging and Stallentis said they have already identified over 1,000 owners or operators of locations across Europe that are likely candidates for cooperation.

What is more, the project is part of Stellantis’ recent efforts to electrify. “Stellantis is working on creating strategic collaborations to disseminate e-mobility”, stated Anne-Lise Richard, Head of the e-Mobility Global Business Unit at Stellantis.

In concrete terms, Stellantis is involved in the project through the e-mobility business unit of its subsidiary FCA Italy SpA. How much Stellantis or FCA Italy and its partner The F Charging will invest in the new charging network and whether government subsidy programs will be used is not clear from the carmaker’s announcement.

While The F Charging has so far relied mainly on fast chargers, the joint network with Stellantis is expected to include both AC and DC charging points. Planning would “actively involve the customers, owners and operators of the locations selected, to define tailor-made solutions for each type of location and clientele,” the two partners write. While the network will be open to the public, Stellantis customers will receive “exclusive conditions” that have yet to be set out.

Installation is to begin before the year’s end in Italy. Stellantis does not disclose more information on the schedule and exact locations. However, the chargers will include sites in city centres or public institutions (e.g. hospitals and schools) and transport hubs and retail locations and not only line the highways, for example. In total, the partners target to install fast-chargers at 15,000 locations covering two million parking spaces by 2025.

Again, it is to be seen how many AC and DC chargers the network will comprise. What is known is that Stellantis and TheF Charging target to use carbon-free energy, “with the ambition to extend this approach to the entire value chain.”

The F Charging already had connections to Stellantis from the start: Co-founder Federico Fea worked at FiatChrysler Automobiles in EMEA Business Development and later was Chief Innovation Officer at Endesa. The second co-founder, Andrea Brendan, is a former CEO of Endesa, a Spanish utility.

Stellantis and the Italian company TheF Charging have now signed an agreement with the company Metropark, which manages the car parks at the main Italian railway stations. The agreement is part of the partnership between the two entities that was announced last autumn for the purpose of building a European charging network.

The agreement foresees the installation of 600 charging points for electric vehicles in 50 car parks at railway stations across Italy. Stellantis said the project will promote the spread of more sustainable mobility, which also benefits from intermodality between rail and road.

Stellantis has not yet revealed the type of charging points that will be built on the Metropark sites near the stations. On average, there will be twelve charging points per location. Whether these will be AC chargers, DC chargers or a mixture of the two is an open question. The press photo published with the group’s announcement puctures an Alpitronic Hypercharger HYC150.