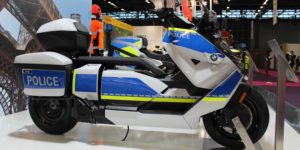 The CE 04, which BMW Motorrad debuted in July, then as a civilian model, now comes specially equipped as a police vehicle. There are LED flashing lights at the front and rear, and authorities case, a siren, and additional switches to control the light and sound signal components.

The drive with its 30 kW maximum power and the 8.9 kWh battery will not be adapted. So the range will remain at around 130 kilometres and the top speed at 120 kph. Like the series motorcycles, the police patrol vehicle will be made at the BMW Motorrad plant in Berlin.

Apart from production, BMW Motorrad also claims to be the only manufacturer that develops authorities components and carries out the homologation of the vehicles and authorities equipment itself. The company says it has delivered more than 160,000 official motorcycles to institutions in over 150 countries since 1970.

Ducati to take over as electric motorcycle supplier for MotoE