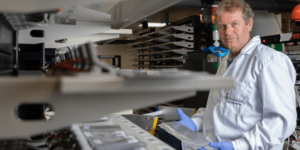 The Israeli battery developer StoreDot has announced a global innovation centre in the USA to accelerate the development of solid-state batteries. It is to be built in California, but StoreDot has not yet named an exact location.

The US facility is intended to support the Israel-based global R&D centre, StoreDot said. The additional capacity and “US talent” will support StoreDot’s mission to promote a zero-emissions world, according to a significant statement.

Specifically, this involves two technologies: First, in cooperation with the Israeli R&D centre, the mass production of XFC cell technology is to be made possible by 2024. The ‘XFC-FlashBattery’ is a cell designed by StoreDot with a silicon-dominant anode. This is said to be distinguished by its enormous fast-charging capability; the Israeli company had demonstrated in an interim step in 2019 that their technology can charge the battery of an electric scooter in five minutes. The first development samples were demonstrated to potential partners in early 2021, and then in May a strategic framework agreement was concluded with the Chinese battery manufacturer EVE Energy – with the aforementioned goal of series production by 2024.

In addition to the work on the XFC battery, the innovation centre in California is to “immediately begin research into next-generation solid-state capabilities and materials with extreme energy density”, according to StoreDot. This technology is to be scaled for mass production by 2028.

As StoreDot CEO Doron Myersdorf indicates, the California facility will allow the company to “leverage the world-class talent pool available there”. In the medium or long term, the company has another activity in the US in mind. “We are also actively considering establishing a manufacturing partnership in the US, as it’s essential that major automotive manufacturing centers have captive capacity, redressing the current imbalance in favor of Asian manufacturers and making batteries where electric vehicles are made,” Myersdorf adds.

So much for the announcements. However, StoreDot remains vague on some points. For example, it does not say how much the company intends to invest in the new US centre and what staffing levels are planned for the site. Or by when the location in California is to be opened. Nor does Myersdorf’s quote indicate how concrete and short-term the considerations for the production partnership are – nor whether the current partner EVE Energy is part of these considerations.

Instead, StoreDot states that it is currently in advanced talks with “many of the world’s leading car manufacturers”. Names have not yet been mentioned. At the end of August 2021, a cooperation with the Vietnamese carmaker VinFast was confirmed. Daimler had already participated in a financing round in 2017.