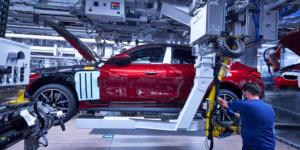 The Munich-based carmaker has started production of the all-electric i4 at its main plant in Munich. This means that, in line with BMW’s approach to flexible production, vehicles with all drive variants are now running on the same assembly line.

As is well known, the i4 is an electric sedan the size of a BMW 3 Series, which is intended to electrify the core of the BMW model range. The model will be launched in November alongside the flagship iX SUV. The i4 is the first fully electric car to be produced in Munich, together with the BMW 3 Series Sedan, the BMW 3 Series Touring – both with combustion engines and hybrid drive – as well as the BMW M3 and the BMW 4 Series Gran Coupé.

Admittedly, the BMW i4 differs from conventional architectures primarily in its electric drive and high-voltage battery. Nevertheless, around 90 per cent of the existing production facilities in the Munich body shop can also be used for the BMW i4, according to the carmaker. Only for the production of the floor assembly and the rear end will additional equipment be required in individual cases. BMW also describes the integration of battery assembly as highly complex: “The battery pack is now bolted onto the body by a new, fully automated battery assembly system that works from below. Fully automated, high-resolution camera systems scan it thoroughly beforehand to ensure the surface is absolutely clean and there are no impurities that could cause damage.”

BMW has invested a total of 200 million euros in the integration of the i4 into the existing production structure. The further development of the plant in the direction of electric mobility was decided several years ago. Since then, a new vehicle assembly line and a new body shop have been built on site, while engine construction has been relocated to the other sites in the production network. The production of the four-cylinder engines will move to the sites in Hams-Hall in the UK and Steyr in Austria at the end of this year. The relocation of engine production in Munich should be completed by 2024 at the latest, BMW says.

“For the plant and team, the launch of the BMW i4 is a milestone on the road to electric mobility,” says production board member Milan Nedeljković. This is because further electrification of the vehicles produced in Munich is firmly planned: According to Nedeljković, from 2023 onwards, more than half of all vehicles produced at the main plant will be electrified, the majority of which will be purely electric.

To coincide with the start of production of the BMW i4, the Munich-based manufacturer has also announced that transport logistics for the plant will be realised locally emission-free in the urban area of Munich within the next few years. To this end, BMW intends to increasingly switch to rail and battery-electric trucks. To put this into perspective: according to BMW, more than 750 truck deliveries are required every day for the delivery of parts. In future, these journeys are to be made in urban areas using e-trucks. About half of the vehicles produced in Munich are already transported by rail. This share is to be successively increased.

As far as the Group as a whole is concerned, CO2 emissions per vehicle produced are already to have fallen by 78 per cent between 2006 and 2020. By 2030, CO2 emissions per vehicle produced are to be reduced by a further 80 per cent. Against this background, BMW has concluded direct purchase agreements for green electricity with regional hydroelectric power plants – among others for the production of the i4. In addition, the BMW Group intends to neutralise its remaining CO2 emissions in production (Scope 1 + 2), which are generated for example by the use of combined heat and power plants, worldwide from this year onwards by means of certificates.