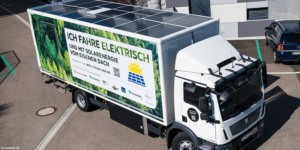 The electric truck with integrated solar system that Fraunhofer ISE has developed with industrial partners has received road approval. Road tests will now show whether the installed photovoltaic (PV) modules can actually cover the targeted five to ten per cent of the truck’s energy demand.

In its announcement of the successful road approval, Fraunhofer ISE sees a “milestone towards more climate-friendly road freight transport”. “By successfully putting our high-voltage photovoltaic system into operation, we have achieved our goal of demonstrating the feasibility of vehicle-integrated photovoltaics for heavy-duty electric utility vehicles,” says Christoph Kutter, project manager at Fraunhofer ISE. “The technical components integrated into the truck function as we expected.”

The modules were developed at Fraunhofer ISE but built by Sunset Energietechnik GmbH. TBV Kühlfahrzeuge GmbH then integrated the modules into the box body of a Framo electric truck, which serves as the first demonstrator vehicle. M&P motion control and power electronics GmbH developed a DC power controller that communicates with the vehicle control system via CAN bus and is integrated into the vehicle’s safety concept. The photovoltaic power from the roof is fed directly into the on-board network of the commercial vehicle.

Lightweight construction and robustness were not the only priorities for the PV modules themselves. During integration, it was also important not to increase the weight. In order to keep material and cable costs low while maintaining a high electricity yield, the researchers connected the solar modules on the roof of the box body in series, which can generate voltages of up to 400 volts. To prevent this from becoming a safety risk in the event of an accident, Fraunhofer ISE has developed a disconnection device that can disconnect the power connection from each PV module “decentrally and without additional communication channels” within milliseconds.

The PV truck will now be used daily by Alexander Bürkle GmbH in the Freiburg area for a year. Not only will the components be tested under real conditions, but the solar power actually generated will also be recorded – “to validate the power yield forecast”. When the project started in 2020, it was said that electricity for 4,000 to 6,000 kilometres would be generated in the vehicle.

In addition, the journeys of the demo truck are monitored by the energy forecast model ‘IVImon’ from the Fraunhofer Institute for Transportation and Infrastructure Systems IVI. This will forecast the range, charging times and electricity generation for different routes depending on the consumption in the vehicle and the solar radiation.

Voltia to produce electric vans in 2022 based on Stellantis platform