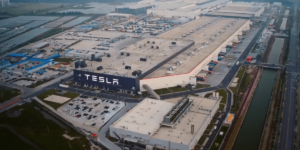 Tesla has completed its new research and development centre at the Gigafactory in Shanghai. The facility is the electric carmaker’s first R&D centre outside the US. In parallel, Tesla has raised a data centre in Shanghai and opened a large delivery centre.

The new facilities signify a further localisation of Tesla’s activities in China. Media reports indicate that the R&D centre and separate data centre were completed this week and are expected to be operational “in the near future”.

The R&D centre employs teams of engineers in software, hardware, electronics, materials and power engineering. Among other things, they are to develop products and services that are strongly tailored to the needs of Chinese consumers. In total, the centre will have 28 labs, including a low-voltage electronics lab, a firmware lab and a materials lab.

The new data centre, meanwhile, is tasked with storing Tesla’s operational data on-site. The facility is the US company’s response to requirements from China’s Ministry of Industry that require companies to store important industry-related data locally.