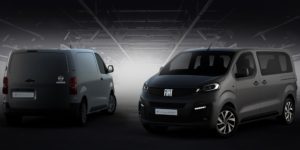 Stellantis has announced the launch of two new Fiat models that will also be marketed as pure electric vehicles. Specifically, these are a van and a delivery van. The names are well known: Ulysse and Scudo.

The current announcement virtually closes the circle for both models: they have already been used for the so-called “Eurovans” since the mid-1990s. This was a joint project of PSA and Fiat to build MPVs or vans on a shared basis under the Fiat, Lancia, Peugeot and Citroën brands. The two generations of Eurovans were manufactured in France. From 2014, PSA placed its Citroën Jumpy/Spacetourer and Peugeot Expert/Traveller models on its EMP2 platform – while Fiat switched to the platform of the Renault Trafic, Opel Vivaro and Nissan Primastar with the new Talento.

Since PSA and FiatChrysler have famously merged to form Stellantis, Fiat vans will once again share technology with Peugeot and Citroën (and now Opel). As Stellantis announces, the new editions of the Scudo and Ulysse are based on the EMP2 platform and will go into production at the plant in Hordain near Valenciennes in northern France.

Stellantis does not yet provide technical data on the BEV versions of the two models in the press release. However, anything other than the familiar 100 kW drive would be a surprise. In the shortest version of the vehicles (around 4.60 metres), only the 50 kWh battery is available; in the L2 (about 4.95 metres) and L3 (5.30 metres) lengths, a 75 kWh battery can be ordered as an option. The range with the small battery is around 220 kilometres in the WLTP standard. With the large battery, 330 kilometres are possible, according to WLTP.

Orders for the Fiat Professional Scudo will open in key countries between the end of this year and early next year, while the Fiat Ulysse will be available from the first quarter of 2022. Stellantis is not yet quoting prices.