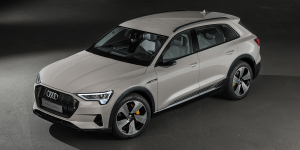 Audi has announced a software update for the Audi e-tron 55 quattro of the 2019 and 2020 model years. This should make up to 20 kilometres more range possible in real driving conditions. However, the vehicles will have to be taken to the workshop to have the update installed.

Audi had already presented a technology update for the e-tron quattro in November 2019. This included some adjustments to the software and hardware and was intended to increase the WLTP range by around 25 kilometres. At the time, it was said that an update of the vehicles already delivered was not possible.

Now, almost two years later, Audi is at least making the software scopes of this update available to existing vehicles – for a total of 34,000 e-tron 55 quattro built between mid-September 2018 (model year 2019) and the end of November 2019 (model year 2020). In terms of hardware, the 2019 update includes the installation of a new wheel brake in which the residual braking torque is lower – i.e. losses caused by the proximity of the brake callipers to the brake disc. This change will still not be available for existing vehicles.

The savings effects of the software adjustment were higher anyway. The 2021 software update also consists of several elements: for example, the usable window of the gross 95 kWh battery is enlarged. The older models mentioned still have the original net energy content of 83.6 kWh. With the update, the battery management now makes 86.5 kWh usable. The charging power of up to 150 kW DC is not changed with the update.

In addition, the control of the front electric motor is adjusted. In normal driving operation, the asynchronous motor installed on the front axle is de-energised in most conditions, the rear motor then takes over sole propulsion – the second motor is only switched on when more power is required. Audi claims that “the great conceptual advantage of the asynchronous motor, i.e. the currentless running without electrical drag losses”, is thus even more effective. But one could also say: the disadvantage of the asynchronous motor, the lower efficiency at low power, is minimised by loading one motor a little more (and thus making it more efficient) instead of running two motors at lower power.

The third measure on the software side concerns the cooling system. In the coolant circuit for the high-voltage components, the volume flows could be reduced, which means that the pump has to work less and thus consumes less power. This effect is likely to be significantly less than the additional usable battery capacity and the engine control.

Audi offers the software update for the affected model years free of charge. However, it cannot be installed “over the air”: A visit to an Audi service partner is required for installation.

In the current model year, the e-tron 55 quattro has a WLTP range of up to 441 kilometres, the somewhat more aerodynamic e-tron Sportback up to 453 kilometres. Since the update in November 2019 mentioned at the beginning, the vehicles have been built without any major changes. A model update is to follow in the second half of 2022, in which the drive technology will also be adapted. This should then make standard ranges of over 600 kilometres possible.