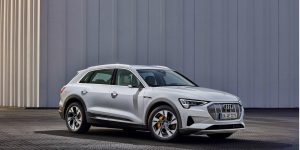 Audi has introduced a technology update for the entire e-Tron series. With a few adjustments to the software and hardware, efficiency is to be increased, which will increase the WLTP range by around 25 kilometres. However, it is not possible to update the vehicles already delivered.

The hardware changes mainly affect the brake system. According to the press release, a new wheel brake will be installed with a lower residual braking torque – i.e. losses caused by the proximity of the brake callipers to the brake disc. However, Audi does not quantify the exact effects of the new brake on the range.

In the drive system, the software has been optimised, especially the part for the interaction of the two electric motors on the front and rear axles. If only the engine on the rear axle is responsible for propulsion during normal driving with low power requirements, the front engine should ensure as little loss as possible. The Audi engineers now want to be able to “almost completely disengaged and disconnected” from the front electric motor “thanks to a number optimisations”. The main aim here is to control the power electronics as precisely as possible because the motor is not separated from the drive system on the hardware side by a clutch. Audi highlights the fact that the conceptual advantage of the asynchronous motor lies in the fact that the engine runs without current and without electrical drag losses.

In addition, the net capacity, i.e. the usable area of the battery, is slightly increased. So far, only 83.6 kWh of the 95 kWh gross capacity have been used. In the future (and also at the e-Tron Sportback presented last week), 86.5 kWh can now be used – the increase in capacity of 2.9 kWh alone, with a WLTP consumption of up to 26 kWh/100 km, ensures an increase in range of eleven kilometres.

The effect of improved thermal management is likely to be much less pronounced: The volume flows in the coolant circuit for the high-voltage components have been reduced, which means that the pump has to work less and therefore consumes less electricity. In the “S line” exterior package now offered, aerodynamics have also been improved somewhat: larger air curtains in the newly designed bumpers are intended to improve the airflow around the car.

The second e-Tron 50 Quattro motorisation with reduced performance data announced in August can also be ordered in Europe with immediate effect. The Audi e-Tron 50 Quattro is available from a gross list price of 69,100 euros, the Audi e-Tron Sportback 50 Quattro from 71,350 euros. The entry-level price for the e-Tron 55 Quattro continues to be 80,900 euros, the price for the e-Tron Sportback 55 has not yet been quoted by Audi.