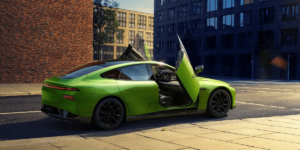 The Chinese manufacturer Xpeng has now also introduced its large electric sedan P7 to the Norwegian market, after the electric SUV G3 has already been delivered there since the end of 2020.

With the market debut in Europe, the WLTP values are now also known – until now, Xpeng had advertised the P7 with an NEDC range of 706 kilometres. The 70.8 kWh battery available in China will not be offered in Norway, here it is exclusively the 80 kWh version. With rear-wheel drive (under the sales designation RWD Super Long Range), a WLTP range of 530 kilometres should be possible according to the current specifications. The WLTP range of the “4WD High Performance” is not mentioned in the announcement.

With the P7, Xpeng is known to rely only marginally on enormous driving performance as a selling point. The driving assistance system Xpilot 2.5 and the specially developed in-car operating system Xmart OS should convince consumers. For the Norwegian version of the P7, Xpeng claims that customers will be assisted by an “intelligent voice assistant” – but the infotainment user interface is only available in English.

Shortly before Christmas 2020, Xpeng had delivered the first units of the smaller SUC G3 in Norway. Even then, it was said that the P7 would be offered in Norway within twelve months – so now it has taken just under ten months.

In the meantime, Xpeng offers its vehicles in Norway in 17 sales outlets, for which the Chinese cooperate with local trade partners. In addition, there are 21 service points in Norway. “We are committed to building our local presence with a long-term perspective,” said Christian Hem , Sales Director of Xpeng Norway, at the P7 launch event in Oslo. “The P7’s launch marks an exciting new chapter as we broaden our sales and service network and accelerate our business momentum to better serve our customers in Norway.”

Specific plans for other European markets are not mentioned in the Norway announcement. Sales targets for Norway are also not known. In its home market of China, the P7 has become the best-selling Xpeng within a few months. In September, 7,512 P7s were sold, plus 2,656 G3 and G3i. In addition, the September statistics include the first 244 P5s; Xpeng has been delivering the smaller sedan in China since 15 September.

Lucid to launch ‘Air’ deliveries by end of October