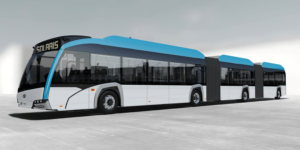 Solaris has received the first order of its latest and longest electric model. The Urbino 24 in MetroStyle is a 24-metre “bi-articulated” e-bus. Tide Bus Danmark, active in the city of Aalborg, expects to see 14 of these all-electric buses enter service.

According to Solaris, the extra-long electric buses were specially designed for BRT (Bus Rapid Transit) routes. The order from Denmark was the first for this double-articulated vehicle with an electric drive, so the manufacturer. Solaris also called the order “unprecedented” due to both the length of the vehicles and the choice of the MetroStyle design.

“We were very glad to hear that Denmark would be the first country ever to receive delivery of electric Urbino 24 MetroStyle buses”, said Petros Spinaris, member of the Management Board for Sales, Marketing and Customer Service. He added he was “convinced that our collaboration with Tide Bus Danmark will open up a new chapter in our activities and support sustainable urban transport.”

The Urbino 24 electric in the MetroStyle version is powered by two electric motors with a system output of 240 kW. The battery pack holds no less than 700 kWh and will be charged via plug. Solaris did not provide details on charging power and charging time nor passenger capacity.

Each of the 14 e-buses headed for Aalborg will be equipped with driver assistance systems, including what Solaris calls the MirrorEye. The camera system replaces the rear and side mirrors and ensures “optimal visibility,” so Solaris. It also reduces the overall width of the bus. The additional Mobileye Shield+ system further eliminates the dangers of the blind spot. Thanks to cameras mounted on both sides of the bus, the driver is warned of pedestrians or cyclists close to the vehicle. To improve fleet management, the Urbino 24 electric MetroStyle will also feature eSConnect, a diagnostic tool to increase operational efficiency and optimize maintenance so the Polish bus manufacturer.

Solaris had debuted the e-bus type at the 2019 BusWorld in Belgium. In today’s statement, the manufacturer described the idea behind the vehicle as “to create a platform for the future serial production of not only 24-metre vehicles with an electric or hybrid drive but also of trolleybuses.”

The order placed by Tide Bus Danmark was the first-ever for this bi-articulated electric vehicle, so Solaris.