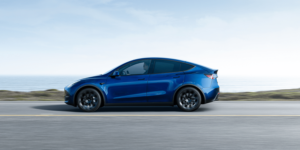 Tesla has adjusted its configurators for the new model year 2022. In addition to changed model names (the name suffix ‘Standard Range’ has been dropped from the basic versions), there are also changes to the range specifications.

According to the changes in the Tesla configurator implemented on Tuesday night, the cheapest Model 3 is now simply called ‘Model 3’ – and not ‘Model 3 Standard Range Plus’ as before. The two other variants with all-wheel drive, however, retain their name additions “Maximum Range” and “Performance” to distinguish them.

However, there is also a technical change for the former ‘SR+’ model: with the 2022 model year, the range specification has increased from 448 to 491 kilometres according to WLTP. This change had already been foreshadowed: there were rumours that the Model 3 would get the 60 kWh battery version in future instead of the 55 kWh LFP storage. The 60 kWh battery made of LFP cells from CATL has so far only been used in the Model Y built in China, but had already been registered for use in the EU. In addition, there had already been isolated deliveries with the larger LFP battery – so now the complete changeover in production seems to have been completed.

The Model Y will also continue to be offered in the current configurator as ‘Model Y Maximum Range’, although it is currently the entry-level model for the series. Here, too, there are rumours (and already type approval) that Tesla will soon bring the Model Y built in China with a 60 kWh LFP battery to Europe – apparently with a range of 455 kilometres according to WLTP. This has not yet been confirmed, but the lack of a name change for the Model Y Long Range could be an indication.

According to media reports, the update in the US configurator introduced an equipment-dependent range specification. If the customer chooses different rims or seat configurations (which influence the vehicle weight), the displayed range is also adjusted – a practice that many manufacturers now also use for their WLTP specifications. The change has not yet been implemented in the German configurator.

The range information for the Model Y Maximum Range has also not been changed: on the German side, this remains at 507 kilometres according to WLTP. In the USA, however, the Model Y Long Range is now offered with four miles more range. Here, too, the reason is probably a new battery: The 82-kWh storage unit with cells from LG Chem has already been type-approved in Europe. It remains to be seen when Tesla will make the switch.

Opel Rocks-e available in Germany from €7,990