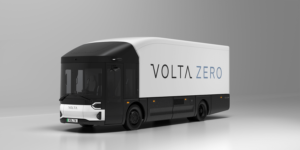 Swedish start-up Volta Trucks has unveiled the final design of its Volta Zero electric truck, specifically the 16-tonne version. The design will also be applied to the future 7.5 tons, 12 tons and 18-ton versions. Production of the first 25 prototypes in the final design is beginning.

While the design of Arrival’s delivery van, for example, has changed significantly from the concept studies to the production model, the Volta Zero does not initially stand out as having any significant changes from the vehicle that the start-up showed in July 2020. According to the company, despite the similarity to the demonstrator vehicle, all body parts have been redesigned. The LED light bar between the two headlights did not make it into series production. The windscreen seems to have become slightly smaller but is still very large.

This is part of the concept of the Volta Zero, which was developed especially for city logistics. The large glass surfaces (also in the doors) and the low seating position are meant to improve the driver’s range of vision and thus contribute to road safety. In addition, the driver sits centrally, with another seat to the right and left of each.

“When the Volta Zero was revealed in September 2020, there were some who thought that its revolutionary, world-first design and packaging was just for show and could never be built for production,” says Ian Collins, chief product officer of Volta Trucks. “We knew it wouldn’t be easy, but our constant motivation was the opportunity that a completely reimagined truck had to improve both the safety of drivers and those vulnerable road users around large trucks operating in city centres.”

In September, the company had announced that the first vehicles would be built at Steyr Automotive in Austria from the end of 2022.

Volta Trucks has begun producing prototypes of its Volta Zero electric truck in the final design as unveiled above. The company wants to build 25 of these prototypes to undergo testing after completion in January.

This will involve Volta Trucks engineers replicating a wide range of customer usage and delivery cycles and taking the Volta Zero to extremes weather environments and crash testing, the company describes.

The current 25 vehicles are still being assembled at a bespoke plant in Coventry, UK. Once the results from the road tests, the so-called Design Verification comes in, Volta will incorporate the findings into the final prototype phase before series production. These prototypes for “Production Verification” will be built by production partner Steyr in Austria from mid-2022.

Volta then plans to lend the production-specification prototypes to selected customers for extended periods to be tested in their real-world logistics conditions, undertaking millions of delivery kilometres alongside Volta Trucks’ engineers, so the company.

The Volta Zero currently under development is the 16-ton version designed for inner-city logistics. Volta Trucks set the operating electric range at 150 – 200 km (95 – 125 miles) and claims the Volta Zero will eliminate about 1.2Mn tonnes of CO2 by 2025.

Volta Trucks’ Head Office is in Stockholm, Sweden, with its engineering unit in the UK and forthcoming manufacturing facility in Steyr, Austria.