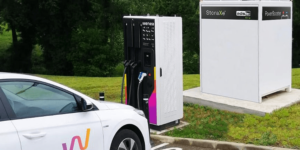 The Spanish charging infrastructure provider Wenea and the German battery specialist ADS-TEC Energy have reached an agreement to increase the output of eleven Wenea charging stations in Spain with battery systems from ADS-TEC. More are in the planning stage.

The battery storage solution from ADS-TEC called PowerBooster will be used to give the stations more charging capacity. The outdoor battery system with a capacity of 120-kilowatt hours is connected directly to the 400-volt power grid, charges slowly and at low power at first, and then releases the power quickly during the charging process to make high charging rates possible.

The first charging station with a PowerBooster has already been put into operation in the north of Spain at a restaurant car park. Wenea and ADS-TEC want to upgrade further locations in the course of this year beyond the first eleven locations since the partners say that grid capacity is not sufficient for powerful fast charging in many places.

“Electromobility is becoming visible, and people want to be able to charge fast everywhere. We are happy to make this possible in places with limited grid capacity in Spain with our battery storage systems,” says Thomas Speidel, CEO of ADS-TEC Energy. The company is a medium-sized family business with headquarters in Nürtingen near Stuttgart and two production sites near Dresden. ADS-TEC says it has been developing and producing battery storage solutions based on lithium-ion technologies for over ten years. This includes their energy management systems up to the multi-megawatt range. In the field of battery-supported fast charging systems, the company is one of the largest German suppliers.

Wenea, for its part, aims to roll out a large-scale DC charging network in Spain. By the end of 2022, more than 470 charging points are to be built across the country under the company’s initiative. The project is supported by the European Investment Bank (EIB) with 50 million euros. According to earlier information, the stations will offer charging capacities of 50 to 150 kW and will be built mainly along motorways and main roads. This does not yet include the “booster function” provided by ADS-TEC’s storage system.

Wenea says it intends to invest 100 million euros in the DC charging network. The company Nordian CPO is also involved in the project. When expanding the network, Wenea does not only want to concentrate on the metropolitan regions: Around a quarter of the charging points are to be built in the less populated areas of Spain to improve coverage for long-distance journeys. Given the network capacities, this is also where there is likely to be the greatest demand for buffer batteries for the charging stations.