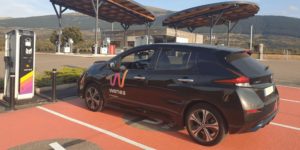 The European Investment Bank (EIB) has provided 50 million euros to charging infrastructure provider Wenea for building more than 470 fast chargers for electric cars nationwide in Spain by the end of 2022.

The stations will offer charging capacities of 50 to 150 kW and will be mainly built along highways and main roads. Wenea says it will invest 100 million euros in the DC charging network, meaning half of the project would be covered by the EIB loan. Nordian CPO is also involved in the project.

The EIB only briefly mentions the charging stations themselves in its statement. What is clear, however, is that the project will involve 470 charging stations (probably with multiple charging points), not 470 charging parks with multiple stations. In expanding the network, Wenea does not want to focus only on metropolitan regions: Around a quarter of the charging sites will be located in Spain’s less populated areas to improve coverage for long-distance trips.

“The EIB’s support enables us to make a qualitative step forward with Wenea, providing coverage to charge EVs and thus ensuring excellence as an independent player focused on our passion – serving electric vehicle clients, who contribute to sustainability of the planet by reducing CO2 emissions,” says José Manuel Zorrilla, CEO of Diggia Group. Nordian CPO is part of Diggia.

In Spain, the EIB is also financing Endesa’s plan to build some 8,500 charging points by 2023 with 35 million euros. The Spanish energy group Iberdrola also has ambitious plans for its charging network, with 150,000 charging points to be built by 2025, including numerous fast chargers with outputs of between 50 and 350 kW.