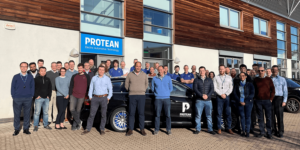 In-wheel motor specialist Protean Electric is getting a new owner. The British EV supplier and manufacturer Bedeo is taking over from National Electric Vehicle Sweden (NEVS), an Evergrande subsidiary that is currently feeling the parent company’s troubles.

Protean Electric was founded in 2008 and claims to hold several hundred patents relating to electric motors. The British company’s most prominent product is based on the company’s in-wheel motor (IWM) technology for electric cars, light commercial vehicles and other transport solutions. In 2019, Saab’s successor company NEVS (National Electric Vehicle Sweden) reportedly acquired Protean to use its electric drive technology in future electric cars. Protean Electric then continued to operate as an independent company but belonged to the Chinese real estate group Evergrande through NEVS.

NEVS, as an Evergrande subsidiary, has been directly affected by the current financial and related existential worries of the highly indebted Chinese real estate group. As a result, the company recently had to lay off 300 employees. NEVS is reportedly looking for a new owner.

The sale of Protean Electric is also likely to serve the consolidation. The company employs around 150 people in the US, the UK and China. It will now be owned by Bedeo, a London-based supplier founded in 2009 specialising in solutions for e-vehicles. The financial terms of the deal are not public. However, an accompanying statement said that Protean Electric will continue to operate under its brand and will be led by its existing management team.

The combination of BEDEO and Protean Electric brings together two highly synergistic providers of electric vehicle technology, reads the statement. In addition, Bedeo would evolve into a “diversified” platform through the acquisition and expand its geographic reach from the United Kingdom and Europe to the United States and Asia.

“We have known and partnered with Protean Electric for many years, and the opportunity to acquire this business represents a material but natural shift and acceleration in our electrification strategy,” said Bedeo’s Founder and CEO, Osman Boyner. “Protean Electric’s highly differentiated proprietary technology and strong customer relationships have fuelled its well-documented success to date, and we are confident that combining the skills and products of our two operations is going to propel Bedeo further into the EV ecosystem.”

Protean is the first acquisition under Bedeo’s growth strategy initiated after the successful capital raise from investor Ludgate earlier this year. “The company retains a strong balance sheet and continue to explore attractive strategic and synergic acquisition opportunities in the electrification space,” so the CEO.

Protean Electric’s CEO, Andrew Whitehead, also welcomed the acquisition, saying they were “immensely excited to join forces with Bedeo.” The combination, so Whitehead would take the company to the next level in terms of scale and product offering.

Protean’s main client remains the 3D-specialist Local Motors. The US company had placed an order for in-wheel motors worth $7.3 million (€6.1Mn) in June for use in the Olli 2.0 electric vehicle. The supply agreement should help accelerate the introduction of the Olli 2.0 “around the world,” the company said at the time.

Geely presents product strategy up to 2025