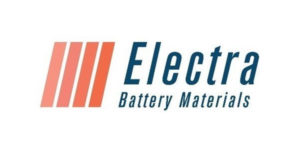 The Canadian company First Cobalt wants to build North America’s first factory complex for the production of battery materials specifically for electric vehicles. As part of the realignment, First Cobalt is renaming itself Electra Battery Materials.

Electra Battery Materials (the name change is subject to shareholder approval) promises to make domestic battery-grade nickel and cobalt, recycled battery materials and precursor materials available locally to North American automakers. Not all immediately, however, but in line with a four-step growth plan. At the beginning of this is cobalt production: Currently, the company expects to begin producing cobalt sulphate at a “battery materials industrial park” in Ontario in the fourth quarter of 2022 on an existing but yet-to-be-modified facility. By that time, an expanded hydrometallurgical battery recycling plant should also be capable of recycling 5,000 tonnes of cobalt. The commissioning of a demonstration plant is planned for 2022 and the start of commercial processing of the “black mass” for 2023.

In addition, the company says it is in talks to secure nickel for a planned nickel sulphate plant in the next growth step. Initially for a good 60,000 tonnes of the battery material per year. Electra Battery Materials plans to start operations in 2024/25. From then on, the company wants to be in a position to “supply enough raw materials to build more than 1.5 million electric vehicles per year”. Based on this, there will be “early discussions” with manufacturers of battery precursors in order to find a joint venture partner for the construction of a battery precursor plant in 2025 in the fourth growth step.

Electra says it wants to “act as a bridge between North American electric vehicles and a North American source of primary and recycled material, providing a low carbon solution for zero emission vehicles”. Given the continent’s rich mineral resources, it does not make sense to supply battery materials to the growing US electric car market via Asia, it said. The large-scale industrial park is to be created by expanding Electra’s existing site in Ontario.

Battery metals such as nickel and cobalt are, of course, already produced in North America. But the Electra plant is expected to be the first factory complex to focus specifically on materials for electric car batteries, according to the company. “Globalization has created an electric vehicle supply chain that is too long, too costly and increasingly unreliable,” said company CEO Trent Mell. “Our automaker clients have a strong interest in greater localization of the upstream supply chain to achieve greater reliability, security of long-term supply, and a lower carbon footprint.”

Michael Insulan, Electra’s Vice President Commercial, added: “”There have been several new battery plant announcements over the past few months in North America, adding to a pipeline already exceeding 500 GWh. These plants are going to require thousands of tonnes of locally sourced raw materials. Electra intends to become the first regional refiner capable of providing these materials in bulk through a modular plant design.”

Politically, there is support for strengthening the battery supply chain. Biden famously scheduled a 100-day review of critical supply chains in the country early in his term. Among other things, it found that the US government should invest in nickel refining capacity in coordination with its allies. More fundamentally, the report recommends that domestic battery raw material mining and, more importantly, domestic processing be spurred through a funding mix of offtake guarantees, federal funds, and research and development into improved recycling technology.