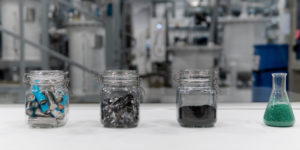 Northvolt has produced its first battery cell with 100 per cent recycled nickel, manganese and cobalt as part of its Revolt recycling programme. The company is now looking to scale up its recycling facilities in Sweden to establish a facility able to recycle 125,000 tons of batteries per year.

When announcing the news of the first NMC cell made entirely from recycled material, Northvolt said the electrochemical performance was “on par with cells with freshly mined materials”. What is more, all recycling and production processes for the recovery and reuse of nickel, manganese and cobalt were completed at a single site, Northvolt Labs in Västerås, Sweden. Specifically, Northvolt recovered the metals for the NMC battery through “a low-energy hydrometallurgical treatment which involves using an aqueous solution to isolate the metals and separate them from impurities,” reads the statement.

“What we have shown here is a clear pathway to closing the loop on batteries and that there exists a sustainable, environmentally-preferable alternative to conventional mining to source raw materials for battery production,” added Emma Nehrenheim, Northvolt’s Chief Environmental Officer and head of Revolt, the company’s recycling programme.

“The recycling process can recover up to 95% of the metals in a battery” explained Nehrenheim. She added, “What we need now is to scale-up recycling capacities in anticipation of future volumes of batteries requiring recycling.”

Northvolt had outlaid the Revolt recycling programme in 2019. Back then, the company targeted an initial recycling capacity of 100 tonnes per year for NMC and NCA chemicals. In today’s announcement, however, Northvolt increased the said target, now aiming to recycle 125,000 tons a year, which would amount to approximately 30 GWh of annual battery production, up from the previous 25 GWh. The long-term plan of producing cells with 50% recycled material by 2030 across all operations remains.

The same goes for the timeline for the planned expansion of the company’s first “giga-scale recycling plant” under development adjacent to Northvolt Ett gigafactory in Skellefteå, Sweden. Construction is set to begin in Q1 2022 and operations in 2023.

Once operational, the recycling plant will receive incoming material for recycling from two sources, the company explained: end-of-life batteries from electric vehicles and production scrap from Northvolt Ett. In addition to recovering nickel, manganese, cobalt and lithium metals for its battery production processes, Northvolt also expects the facility to recover copper, aluminium and plastics from the batteries and materials it recycles – all of which will be “recirculated back into manufacturing flows through local third-parties.”

Revolt Ett would become the largest battery recycling plant in Europe and the only large-scale European facility capable of recycling lithium in addition to nickel, manganese, cobalt, and other metals, according to Northvolt.

“We should be mindful that some 250,000 tons of batteries will reach their end-of-life in Europe by 2030,” commented Nehrenheim. She added that they would see this as an “opportunity”.