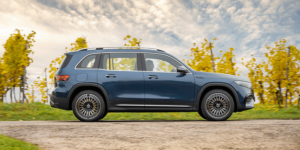 Mercedes-Benz has revealed more technical details about its EQB, which was presented in April. In Europe, two all-wheel-drive variants will initially be offered: The EQB 300 4Matic with 168 kW and the EQB 350 4Matic with 215 kW output.

Both use a battery with 66.5 kWh of usable energy. Since the WLTP consumption of the two all-wheel-drive vehicles is also the same, the ranges are each up to 419 kilometres according to WLTP. Other variants will follow, including a particularly long-range version. Daimler has yet to say whether this will be the front-wheel-drive model known from the EQA with the sales designation 250 with the 66.5 kWh battery or a variant with a larger battery.

A three-phase onboard charger is installed for AC charging, and Mercedes quotes a charging time of 5:45 hours. The maximum DC charging power is 100 kW – but since the charging curve is very flat, the EQB should be able to charge from ten to 80 per cent in 32 minutes. With “Electric Intelligence” route guidance, the cells are preconditioned for optimal charging performance before the planned fast-charging stop.

What is clear, however, is that series production of the all-electric compact SUV with up to seven seats has already started in October. The EQB, which was presented in April, will be launched in Europe and China at the end of this year, followed by the market launch in the USA in 2022. Prices for the EQB are not yet known.

As is well known, the EQB is based on the GLB combustion model and also adopts its wheelbase of 2.83 metres; in total, the EQB is 4.68 metres long. The EQB has no frunk under the long front bonnet of the combustion model. With its angular body and steep rear window, the EQB should offer plenty of space in the interior and thus be suitable for families, as Daimler emphasises. The boot capacity is between 465 and 1,620 litres for the seven-seater and between 495 and 1,710 litres for the five-seater.

The Mercedes EQB is now available to order. The prices for the German market have now been revealed. At the start, the two all-wheel-drive variants EQB 300 4Matic with 168 kW and EQB 350 4Matic with 215 kW output are available, with list prices starting at 55,311.20 euros and 57,988.70 euros respectively. For a limited period after market launch, the EQB is available as Edition 1 (8,520.40 Euros).

Since even the EQB 300 4Matic, at 46,480 euros net, remains above the Bafa limit of 40,000 euros, the vehicle is only subsidised with the reduced environmental bonus. By the end of the year, the subsidy including the innovation bonus will thus amount to 7,975 euros. Since, as things stand at present, the innovation premium of 2,500 euros will be abolished from 1 January 2022, the EQB will then still be subsidised with 5,475 euros. However, the EQB is not yet on the German Federal Office of Economics and Export Controls’ list of eligible vehicles, which is still valid as of 4 November 2021.