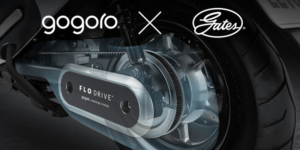 The Powered By Gogoro Network (PBGN) includes some of the largest two-wheeler manufacturers in the world, such as India’s Hero Motorcorp and China’s Yadea and DCJ. In October this year, the latter agreed to create a Chinese battery swap brand with Gogoro. Gogoro also has longstanding partnerships with companies like Yamaha and Suzuki that will also use the FLO drive developed with Gates.

The network relies on the Gogoro Development Kit (GDK), which provides Gogoro’s vehicle partners with a complete system and design options. Gogoro also brings its battery swapping system for electric scooters to the mix, which is among the world’s most extensive and particularly widespread across Asia.

“Gogoro and Gates have worked together for years,” echoed Horace Luke, Gogoro founder and CEO, Gogoro. He also pointed to increased durability and low maintenance of the co-developed FLO drive system.

For now, the Flo Drive can be seen on Gogoro’s Viva Mix electric scooter. The drivetrain consists of a 6 kW water-cooled motor combined with Gates’s carbon fibre belt drive system to power the rear wheel.

Gogoro and Gates claim the drive was easier to maintain and offered more responsive power along with a 40% quieter ride experience. This is also due to Gates “highly engineered” sprockets on which the carbon fibre belt runs.

In Europe, the FLO drive will debut at the EICMA show in Milan, Italy, running from 23 to 28 November.

Gogoro was established in Taiwan in 2011 and now expects to go public via SPAC deal shortly.