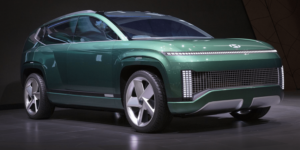 At AutoMobility in Los Angeles, Hyundai unveiled the battery-electric SUV concept vehicle Seven – a preview of its large E-SUV Ioniq 7. The production model is not scheduled for market launch until 2024, which is why the Seven is not yet a near-production study.

The technical basis of the Seven is the Electric Global Modular Platform (E-GMP), which should enable the Seven or Ioniq 7 to achieve a range of more than 480 kilometres and short charging times. The 480 kilometres correspond precisely to the value that Kia has also mentioned for its Concept EV9 based on the same platform.

As far as fast charging is concerned, Hyundai notes that the Seven can be charged from ten to 80 per cent in “about 20 minutes” at a 350-kilowatt fast-charging station (which does not necessarily mean that 350 kW is also possible at peak times). This is made possible by the familiar 800-volt system of the E-GMP. Without information on the battery size, however, no conclusions can be drawn about the charging curve.

The Korean company did not provide further data on the study’s drive system at the trade fair premiere. All that is known is that the wheelbase of 3.20 metres is another ten centimetres longer than in the Kia Concept EV9 – and thus, there is plenty of space for batteries between the axles.

Visually, the Seven takes up some elements of the Ioniq 5, such as the pixel LED graphics in another variation. The front and sidelines already look as if they could go straight into series production were it not for the missing exterior mirrors. The large windscreen and the relatively low shoulder line (with consequently high side windows) suggest a pretty good overview for the driver. At the rear, with its large glass surface, the Seven still looks more like a concept car – although Hyundai has just proved with the Ioniq 5 that they sometimes stay very close to the studies in their e-models.

The Seven has rear doors that open in opposite directions, which gives a view of the newly designed interior. On the body, the Hyundai Seven also offers one or two technical gimmicks, such as the ‘Active Air Flaps’ for the wheels, which are automatically extended or retracted – depending on whether optimum brake cooling or lower air resistance is required.

In the first teaser pictures, Hyundai had already hinted at taking a different approach to the interior. The Seven has lounge-like swivel seats and an L-shaped bench seat, more reminiscent of lounge furniture than a car seat. Some technical refinements have also been installed inside: A screen (‘Vision-Roof’) is integrated into the roof of the electric study, on which different content can be displayed for maximum relaxation or entertainment. There is also a built-in mini-fridge for drinks and special cleaning compartments to clean passengers’ shoes.

“Seven paves the way forward for what an SUV needs to become in the EV era with a unique aerodynamic pure form that does not compromise on its rugged personality,” says SangYup Lee, Senior Vice President and Head of Hyundai Global Design. “The interior opens up a new dimension of space that cares for its passenger as a family living space.”

The Hyundai Seven previews the production model Ioniq 7, which is due to be launched in 2024. The Ioniq 6 e-sedan is scheduled to debut in 2022.

Aiways teams up with Astara for Spain & Portugal