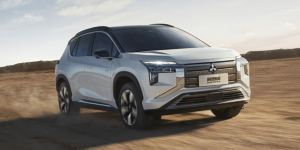 Mitsubishi has just presented an electric SUV at Auto Guangzhou as part of its Chinese joint venture with GAC. The Mitsubishi Airtrek is to be produced by GAC Mitsubishi Motors for the Chinese market from next year.

The model has a 70-kWh battery, which is supposed to provide a range of about 520 kilometres according to the Chinese standard (CLTC – China light-duty vehicle test cycle). Mitsubishi has not yet provided any information on the drive and charging power, but visually, the Mitsubishi Airtrek is strongly reminiscent of the GAC Aion V, which has been on the market in China since 2020 and has recently been available with a graphene battery.

Mitsubishi recently unveiled the new edition of its Outlander PHEV. The SUV will go on sale in Japan in December, followed by Australia and New Zealand in the first half of 2022 and North America in the second half of 2022. As reported, sales in Europe are not planned. This is related to Mitsubishi’s strategic plan presented in 2020, according to which no new models will be introduced on the European market for the time being, although existing models will continue to be sold.

As far as other electric and plug-in hybrid models are concerned, Mitsubishi recently launched the Eclipse Cross PHEV (also still in Germany). In the 2022 financial year, the new edition of the Outlander PHEV is to follow. In addition, Mitsubishi is planning the study of a purely electric kei car, meaning a type of Japanese small city car, with Nissan for 2022.

Mitsubishi Motors is aiming for a 50 per cent share of electrified vehicles by 2030, with the main focus on plug-in hybrids. This is according to an environmental plan published by the manufacturer at the end of 2020.

The Japanese carmaker is part of the Renault-Nissan-Mitsubishi manufacturing alliance, which had restructured its global cooperation at the end of May 2020. At the core of this reorganisation is a stronger regional split, with one brand per region taking the lead. Mitsubishi is responsible for the ASEAN countries and Oceania. Each of the companies is to concentrate on these defined core regions and be among the “most competitive” carmakers in those markets, and therefore also increase the respective competitiveness of the partners.

Since the other two brands in the alliance were already in the lead in markets where governments are promoting battery-electric cars, Nissan is to primarily focus on China and the USA, while Renault is to concentrate its focus on Europe where, of the three, it already has a strong lead.

“We hope the all-new Airtrek will help expand the horizons of customers in China, where environmental initiatives are accelerating with new energy vehicles, especially EVs,” said Takao Kato, president and CEO of Mitsubishi Motors Corporation. With its large size and relatively long-range, rather than the tight spaces of Chinese cities, this large electric car might be a better size for the sprawling expanses to be covered for the Australian and New Zealand markets – should the Australian federal government at some point get behind the uptake of electric vehicles.

“We named the new electric SUV Airtrek so that many customers can enjoy adventurous, active driving with this pure EV, which achieves a maximum driving range of approximately 520 km while emitting zero CO2 in motion,” said Kato.