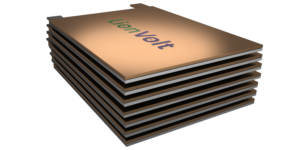 Dutch battery start-up LionVolt has closed a seed funding round of four million euros. The company is developing a lithium metal-based solid-state battery that will be suitable for electric vehicles and aviation, among other applications.

Exactly how LionVolt plans to achieve these improvements has not been elaborated upon in their announcement on the closing of the financing round. The company certainly isn’t starting from scratch but was spun off from TNO in 2020 and can indeed build on six years of research and development for its battery concept as the company says. TNO is the Netherlands Organisation for Applied Scientific Research.

“The battery industry requires a bold new approach to meet evolving needs in terms of cost, performance, safety and sustainability. We are pioneering that solution while building a strong ecosystem to support this innovation,” said LionVolt CEO Karl McGoldrick. “The support of TNO and our investors will not only bring our R&D to its next stage but will further establish the Netherlands as a hub of Climate Technologies.”

Participants in the seed funding round were: Venture capital firm Innovation Industries, start-up fund Brabantse Ontwikkelingsmaatschappij (BOM) of the Brabant region and investor Sake Bosch, among others.

In a pre-seed financing round earlier this year, LionVolt was already able to gather 1.25 million euros from a number of investors. Participants in the second round that were already active in the first are Innovation Industries and BOM.

Daimler battery recycling plant to be in Kuppenheim