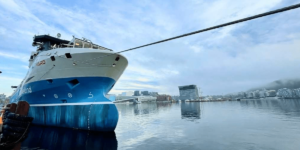 The first autonomous zero-emission container ship Yara Birkeland has completed its maiden voyage in the Oslo Fjord. A two-year technology test phase begins before the ship is certified as “an autonomous, all-electric container ship.”

Fertiliser firm Yara had commissioned shipbuilder Vard in 2017, the brief being to build the Tesla of the Seas. The company expected the Yara Birkeland to handle the equivalent of 40,000 truck trips between the fertiliser production facility in Porsgrunn, southern Norway, to Brevik for onward transport already at the end of 2018 to ease the burden on road freight traffic.

While updates had been provided in between, it took Yara partner Kongsberg until now to get the maiden voyage underway. Accordingly, commercial transport operations are to start in 2022 – initially still manually controlled. During the two-year test phase, the vessel’s self-propelled technology will be tested and later certified.

The vessel’s self-propelling capability is guided by GPS, radar, cameras and sensors so that the electric ship can navigate itself around other boat traffic and also dock on its own. Kongsberg, which builds guidance systems for civilian and military uses, signed responsible for the technology.

The Yara Birkeland has an all-electric propulsion system (2x 900kW Azipull pods and 2x 700kW tunnel thrusters), which draws its energy from a 7 MWh electricity storage system from Leclanché. The 80-meter-long and 15-meter-wide vessel can transport up to 120 20-foot containers per trip.

Enova, a government enterprise responsible for promoting renewable energy, had allocated up to NOK 133.5 million (over €13Mn) to the Yara Birkeland. The project budget was set at 25 million euros, about the same as fossil-fuel-powered vessels cost.

Oslo Port aims to cut 85 per cent of emissions of carbon dioxide, sulphur oxide, nitrogen oxide, and particulate matter by 2030, with the goal of becoming the world’s first zero-emissions port.