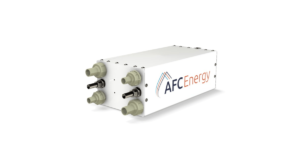 ABB has ordered hydrogen fuel cell systems from its British partner AFC Energy to power fast-charging columns. According to the British company, the order is worth four million pounds (4.75 million euros) and the fuel cell systems are to be delivered from 2023.

ABB and AFC Energy formed a strategic partnership in late 2020 to develop an off-grid fuel-cell-powered charging solution for HPC sites with limited grid access. The order for the 200 kW ‘S’ series system has now been placed for this purpose.

AFC Energy says that the fuel-cell system can run on either hydrogen or ammonia. The fuel cell generator will be installed in a container that is approximately the size of a ten-foot shipping container. The electricity generated there will then be able to be used to charge electric cars via a fast-charging column from ABB – and this in regions where there is no or only limited grid connection.

According to AFC Energy, the generator of the ‘S’ series features the company’s own anion exchange membrane technology (AEM) that enables it to achieve higher energy density. In addition to being used for fast charging columns, the S-series is also said to be suitable for applications in data centres, marine applications and similar cases to fast charging columns that require off-grid power supply.

“With the accelerating transition to electric vehicles, there is an increasingly urgent need for additional fast charging capability and particularly in cost-effective areas that are not connected to the grid or where the grid is constrained,”  says Frank Muehlon, head of ABB’s E-Mobility division. “We believe AFC Energy’s zero-emission, hydrogen fuel cell system to be part of the solution that will allow us to make EVs accessible to everyone.”

When the partnership was announced in December 2020, the two companies said that a corresponding HPC solution with a fuel cell generator would be offered in Europe and the USA as early as the second half of 2021. Although the companies have not offered any news on this front, they have revealed that in summer this year, an AFC fuel cell system of the ‘L’ series went into operation with energy storage and charging technology from ABB in their plant in Estonia.