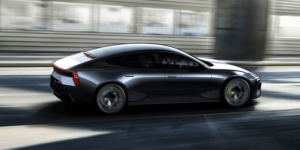 Polestar has previewed the final design of the Polestar 5 in a documentary series on Youtube. The electric four-door performance GT based on the Polestar Precept study is scheduled for market launch in 2024.

In terms of basic shape, the vehicle now shown remains very close to the concept: the proportions are more or less the same as the Precept presented in spring 2020, such as the flat front and the curved roof arch. Only the rear appears somewhat flatter. But here, too, the basic light design has been retained.

Some changes that stand out: The bar for the lidar sensors mounted above the Precept’s windscreen has disappeared. The study’s doors, which open in opposite directions, will probably not make it into series production either; the grey sedan also has door handles on the rear doors that suggest a forward opening.

But why is Polestar showing the series design of a vehicle at the end of 2021 that is not due to come onto the market until 2024? And in a Youtube video rather than at a major event? “With the Precept docu-series, we are deliberately doing something that car manufacturers don’t normally do – we are taking a look behind the scenes and transparently showing how we are turning this stunning concept car into reality,” says Polestar CEO Thomas Ingenlath. “It makes me very proud to see how much of the concept car’s design has gone into the Polestar 5 – a great achievement by our designers and engineers.”

The Swedish-Chinese brand has not yet given any details about the drive technology of the Polestar 5. On the fringes of the presentation of the Polestar 2 Single Motor, Polestar had mentioned a few key data. Among other things, the ‘Luxury Sport GT 4-door’ Polestar 5 was said to be launched in 2024 – and to have a target range of 600+ kilometres. In terms of price, the model is to be priced in the region of a Porsche Panamera.

The electric car brand aims to increase its annual sales to 290,000 vehicles by the end of 2025 with the expansion in existing and new markets and the introduction of the models 3, 4 and 5.