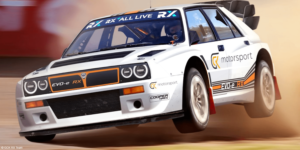 At least with the electric drive system, not much development work was necessary: In the WRX (World Rallycross), a unit drive with 500 kW power is used, which is supplied by Kreisel Electric. In the end, which body is put on this drive platform is secondary – but there is some freedom for the developers when it comes to the chassis.

The fact that the GCK team then decided on a vehicle that is currently not even available for purchase is due to the rally history of the Delta Integrale. With this vehicle – at that time still with an internal combustion engine – Lancia won the manufacturers’ title five times and three drivers’ titles in the World Rally Championship between 1988 and 1992.

“It is the rally car par excellence – without doubt the most incredible of its era – and one that remains hugely popular to this day,” says team founder Chicherit in the FIA’s announcement. “The race format lends itself perfectly to delivering one of the most thrilling sporting spectacles with electric cars so far, and we chose the Lancia Delta Integrale because it is a vehicle that made us all dream.”

As this is a GCK project, the Delta Integrale for the WRX is not an official precursor to an official Lancia model. Such a vehicle had been announced by Lancia CEO Luca Napolitano in October. “It will return and it will be a true Delta – an exciting car, a manifesto of progress and technology, and obviously it will be electric,” Napolitano said in an interview. Media subsequently speculated that the compact car could be based on the Stellantis Group’s STLA medium platform. This platform allows front-, rear- and all-wheel drives as well as ranges of up to 700 kilometres.

Back to the GCK project: It is not yet known how many cars the team intends to use. Drivers have also not yet been signed up or publicly confirmed.

Exactly one year ago, GCK Motorsport also announced an electric racing car for the Dakar Rally. There was no update on the vehicle called e-Blast 1 when the Delta Integrale was announced.